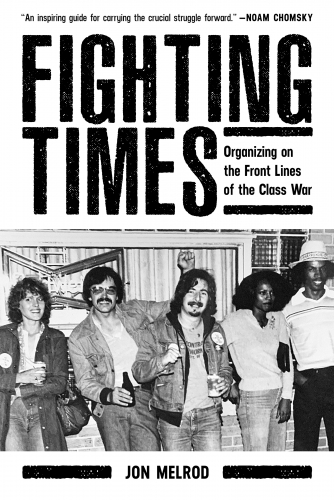 Jon Melrod has written a page-turning memoir of his years as a revolutionary activist from his student days in Madison through his years working in the American Motors Corporation’s (AMC) auto plants in Milwaukee and Kenosha. Melrod’s exceptional story-telling abilities and his honest account of life and political battles inside and outside of the declining “Little Fourth ” of the U.S. auto industry never fail to inspire.

I encourage everyone to read Fighting Times, and I hope radical activists can host in-person or online meetings with Melrod, there is much to learn from his experience during the 1970s. The last few years have seen a renewed interest in the years following the collapse of the Students for a Democratic Society (SDS) in 1969, the largest New Left youth organization of the 1960s, and the “turn to the working class” thousands of radicals during the rank and file rebellion of the 1960s and 1970s.

Articles by veterans of the 1970s recounting their experiences and lessons for today’s activists have appeared regularly and are available here, here, and here. David Ranney’s full-length memoir “Living and Dying on the Factory Floor” published by PM Press was reviewed by Tempest two years ago. Melrod’s memoir is also being released at an important moment of discussion, debate, and an uptick in strike activity and new organizing, especially those flowing out of the success at Starbucks.

Motivated to write his memoir after his first bout with pancreatic cancer—so that his sons could understand their father’s political life—the book has a fierce honesty about it with no romance of industrial work. Melrod is sure that one of his first industrial jobs exposed him to the deadly chemicals that caused his cancer. He pulls no punches on the dirty, noisy, and dangerous work in auto plants. This AMC-produced video—despite its cheery tone—captures the mind-numbing assembly line work in Kenosha, despite having the best contract in the UAW.

Melrod was a talented and tireless organizer…organizing a union’s caucus…producing a workplace newsletter, organizing wildcat and official strikes, and [fighting] his battle to win his job back after being fired.

After French automaker, Renault bought AMC, Melrod and his caucus made one of the first attempts—that I am aware of—by rank and file U.S.-based activists to reach out and coordinate activity with other unionized workers internationally. Renault at the time was the seventh largest automaker in the world with operations on a global scale. This was at a time when the xenophobia of the UAW and many auto workers was running at a fever pitch because of declining auto sales to foreign competitors.

Melrod was a talented and tireless organizer from his first days on the job through organizing a union’s caucus, to producing a workplace newsletter, organizing wildcat and official strikes, and his battle to win his job back after being fired. He was also exceptional at handling people. One of the most harrowing stories in Melrod’s memoir is when a co-worker, a Nazi, put a knife to his ribs and threatened to kill him at a local bar. He talked him out of it. Wow!

One of the big surprises in the book was the historic victory for free speech rights after an AMC-backed effort to squash Melrod’s Fighting Times newsletter through a libel suit. AMC lost the suit. I had never heard or seen any reference to it before, anywhere. But, Melrod’s political work at AMC came to an end like many radicals when the plants were closed, and he went to law school and became a lawyer specializing in refugee and asylum work.

I can’t speak highly enough about the book, but there is an elephant in the room that needs to be addressed, which is the disastrous impact of Maoism on the U.S. New Left. While Melrod proclaims his membership in the Revolutionary Union —which became the Revolutionary Communist Party (RCP)—he barely mentions the underlying politics that motivated him and thousands of others to seek out industrial jobs.

After all, the various revolutionary currents of the 1970s sought out industrial jobs because they wanted to build mass revolutionary parties. The RCP today is an absurd, tiny sect around its aging, eccentric leader Bob Avakian, but in the 1970s it was the largest of the Maoist groups or what they would have called themselves at the time “Anti-Revisionist,” who sought to supplant the U.S. Communist Party, as the biggest party on the Left.

Maoism had a revolutionary élan to it primarily because of the impact of the Chinese Cultural Revolution that swept across the globe from 1966 onward and appealed to radicalized students as an alternative to the tired, orthodox communist parties. And, the Maoists were ambitious. The Worker, the RU/RCP published by Melrod and others had its gutsy frontline reporting on workplace struggles and how they boldly integrated it with reporting on Native American struggles in Wisconsin.

Yet, the cult-like devotion to Chinese Communist Leader Mao Zedong and the totalitarian state that he led with disastrous consequences. During the 1970s, the wild twists-and-turns of the Beijing government from opposing U.S. imperialism to making an alliance with it after Nixon’s historic visit in 1972 to its support for a series of corrupt and fascist regimes, including General Pinochet in Chile, sent the already fractious Maoist groups into a tailspin.

What Melrod thinks about the legacy of Maoism isn’t clear from his memoir—and I’d like to hear about it someday—but it doesn’t take away from an important book that should be widely read.

Jon Melrod’s Fighting Times: Organizing on the Front Lines of the Class War will be released on August 27.

Joe Allen is a long-time labor activist and writer. His latest book is The Package King: A Rank and File History of UPS.