Skip to content
Thomas Hummel sat down with Starbucks’ worker and organizer Brian Murray, a member of Starbucks Workers United, to discuss the organizing movement that has swept across the country in recent months. Minor edits have been made for readability.

Thomas Hummel (TH): What has Buffalo’s relationship been with the other unionizing Starbucks locations around the country? How have you been able to learn from each other’s experiences? What role has Buffalo played in shaping the broader movement?

Brian Murray (BM): Since Buffalo was the place where this all started, where we got the first unionized stores, it  kind of played something of a leadership role, or at least a coordinating role. We’ve gone through the whole process up to bargaining. We have dealt with Starbucks’ union-busting in many forms, from the captive audience meetings to the over one hundred “support managers,” as Starbucks calls it, where they pull managers from around the country to come into Buffalo to spy on workers, to their making sweeping changes to make it hard to unionize and placate workers. So we’ve kind of seen the gambit in terms of Starbucks’ first round of tactics, and we’ve had people reaching out to us.

[W]e’ve been able to develop Buffalo worker-organizers, baristas helping other stores organize because we’re trying to keep this organizing, as much as possible worker-to-worker, or “partner-to-partner,” in the language of Starbucks. That’s the model we’ve used to launch these campaigns.

Initially, this was just a local project. For a while, after the local coffee chain SPoT Coffee had organized, workers had been reaching out to their new union, Workers United, asking, “how can we do that at Starbucks?” When the campaign started, from the union’s point of view,it was just like “let’s organize a few local Starbucks, it will help support the workers at SPot.” When I was brought in around June – people had reached out to me since I was working at Starbucks at that point – that was pretty much the scope we were looking at. We never expected this to grow, or have this much energy. We could have probably hoped, but that wasn’t anything that was ever focused on.

We were kind of thrust into a position of coordination, just from people reaching out to us and us being able to say “this is what we’ve done, this is what has worked, these are the materials that we have worked on.” In the process, we’ve been able to develop Buffalo worker-organizers, baristas helping other stores organize because we’re trying to keep this organizing, as much as possible worker-to-worker, or “partner-to-partner,” in the language of Starbucks. That’s the model we’ve used to launch these campaigns, just workers reaching out and then us helping those new stores launch their campaigns.

TH: This unionization drive is unique in that it has centered your LGBTQ+ coworkers. Starbucks has been accused of racist practices in the past. For example, Starbucks Workers United has said that too few workers of color get hired and promoted. Starbucks also prohibited workers wearing “Black Lives Matter” pins in the wake of the George Floyd murder. How do you see your organizing efforts connected to the struggle against oppression?

BM: I think ultimately what we’ve been saying is that Starbucks likes to posture as this progressive company that’s pro-LGBTQ, that’s pro-Black Lives Matter, but only after massive backlash against not supporting partners wearing “Black Lives Matter” pins and masks. But you can’t pick and choose what sides of justice you stand on, and ultimately if you don’t stand for labor justice and workers’ rights, that means you don’t stand for any type of justice. When workers try to organize they’re going to be LGBTQ workers, they’re going to be black workers. So those claims of being pro-LGBTQ, or pro-partners of color fall flat when those same partners are the ones who are trying to organize. When they’re getting fired, or disciplined and tormented by Starbucks to try to stop us from organizing, it just shows how hollow those claims are.

This is a movement that encompasses all sorts of demographics. LGBTQ people, Black and Hispanic people, they’re all a part of this, and if Starbucks wants to live up to their proclaimed values, it needs to acknowledge our right to organize.

TH: How have you responded to the firing of Cassie Fleischer as well as to the firings in Memphis? Has this affected morale one way or the other as far as you can see?

BM:Starbucks aimed, with both those firings, to scare workers, to try to cool down the movement. They’re not going to win. We’ve already filed charges with the National Labor Relations Board, there’s movement on it, and I think we’re going to see decisions brought down sooner rather than later reinstating those workers. Even the short-term attempts to slow down the organizing hasn’t stopped us. We broke over a hundred stores. It’s not slowing down.

Starbucks is just showing their true colors by those actions. Contrary to scaring workers I think it’s now galvanizing them since they’re seeing that there are no real protections. Starbucks wants to posture as this great company that has all these amazing benefits, but partners know that these benefits do not actually meet our needs. We don’t actually have a voice or a say in our wages. There’s obviously no democracy in our workplace. These firings have shown workers that what we have been saying is true. They’ve been willing to fire workers just for organizing. We’re giving support to these workers, and we’re now seeing the country rally behind them. 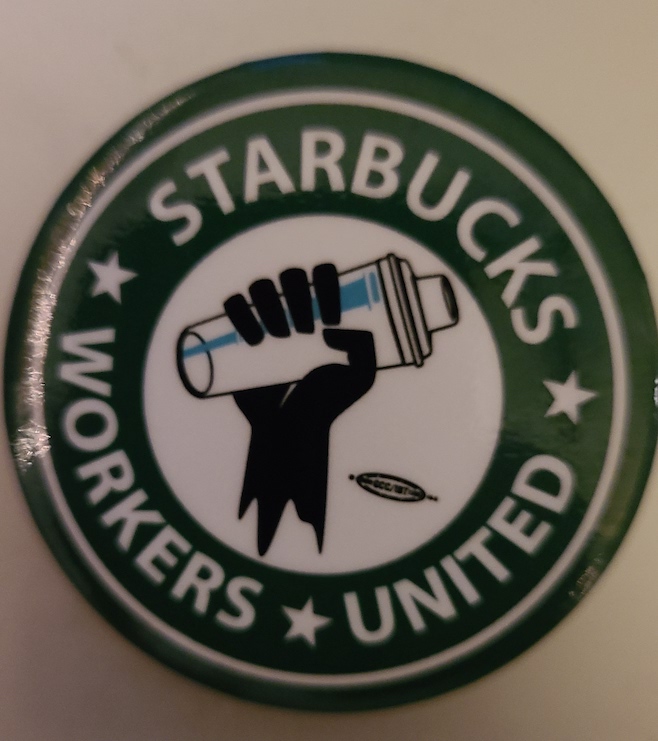 BM:In terms of rank-and-file democracy our bargaining model isn’t going to be any different from our organizing model. Just as our organizing model is worker-to-worker, it’s going to be workers directly bargaining in each of these stores for their contracts. Workers United doesn’t have union reps or lawyers bargain on workers’ behalf. It’s going to be just these workers bargaining in these stores, creating democratic structures in their workplaces, and potentially a national of Starbucks workers that will be run by and for Starbucks workers. Those are some of our long-term goals.

In terms of maintaining rank-and-file democracy, we don’t have a full vision of what that’s going to look like. We have aspirations, and we have hopes, but right now our focus is really winning the right to organize from Starbucks by continuing to organize, by continuing to bring people in around our message of democracy in the workplace.

I think it’s safe to say that within six months or so we’ll see more and more stores winning these elections and going into bargaining, and there will be more and more mounting pressure on Starbucks to recognize the right to organize, not just from the federal government, but also from our movement. This isn’t just a one-off union drive. This is really a movement that we’re building, drawing not just on Starbucks workers around the country, but connecting to other social movements, to hopefully change what it means to be a service worker in this country.

Service work is like the factory jobs of the 1930s now. These are pretty much the standard kind of jobs that people have. Those jobs were low paying, considered to be menial, – “oh, you’re just standing on an assembly line, putting the same bolt in or whatever on a car, why should you be paid a living wage plus benefits?” I think that was unimaginable before they were organized. Hopefully, with enough pressure, we can at some point in the not-so-distant future change what it means to be a service industry worker.

TH: You’re a socialist and a DSA member. In your mind how does this fight figure in the struggle to build a strong socialist left in this country?

BM: First, I want to say that this campaign is open to people of any sort of political bent. Before I get into my own personal views, I think that organizing a union is something that every working class person should be allowed to be a part of, regardless of their politics. It can really show people with different politics the power of coming together as the working class. Because regardless of our politics, a Trump voter working at Starbucks has more in common with me than Trump or the CEO of Starbucks, Howard Shultz.

Socialism is the broadening of democracy from the political sphere into the general social sphere, and that’s what this movement is doing.

But as a socialist, it’s imperative that we rebuild the labor movement. The labor movement has been in decline for a long time. That has come from the intense amount of union-busting and predatory changes in management strategies along with these firms that have sprouted up since the 70s to fight unions. The thing we can control as the rank-and-file is to push resources into organizing at our workplaces, to organize inside our unions, and to make sure that people are meaningfully involved. We have to hold our unions accountable so that they are actually meeting the needs of the workers and people directly see the need for the union, understand why it’s there and how it’s benefiting them.

Unions are some of the most democratic structures we have in this country, so it’s imperative that we engage with that, while reforming the things that need to be reformed. Socialism is the broadening of democracy from the political sphere into the general social sphere, and that’s what this movement is doing. It sounds like a simple thing, but why shouldn’t eight hours of your day be democratic?

Thomas Hummel is a member of the Tempest Collective living in New York City.