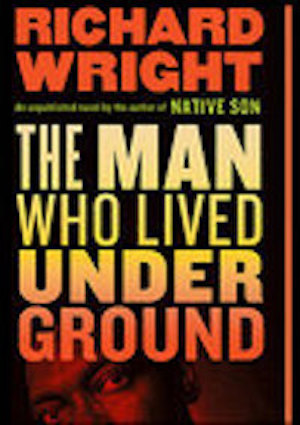 The Man Who Lived Underground. Richard Wright. Library of America. 2021

Richard Wright would not have been surprised by police torture. Almost seventy years before disclosures that Chicago cops had been shackling, beating, murdering, and disappearing people at Homan Square on the city’s West Side, Wright published a short story about Fred Daniels, a working-class Black man snapped up by police on payday while walking home to his pregnant wife. The cops accuse him of raping and murdering a white couple near his workplace. He is dragged brutally to a precinct house. And then:

Johnson yanked him up and clapped steel bands upon his ankles; then Johnson and Murphy lifted him bodily and swung him upside-down and hoisted his feet to a steel hook on the wall. The steel bands on his ankles were looped over the hook and he hung toward the floor, head first. Blood pounded in his temples and his heart and lungs sagged heavily in his chest. He could hardly breathe.

The 2021 edition of The Man Who Lived Underground—the unpublished novel upon which Wright’s original 1944 story is based, and now available from Library of America—feels like a blast from our present. It is capitalist history written in blood. Tempest readers should run to it.

Richard Wright is probably best known to many as the author of Native Son, his shattering 1940 novel about Bigger Thomas, a Black Chicago youth condemned to die after accidentally killing a rich white girl he is hired to chauffeur by his wealthy landlord. Wright’s novel, based on the true story of Robert Nixon, a Black Chicago man condemned to death for murdering a white woman, was written in a white-hot rage: the book exposed the courts, the police, the law, the real estate industry, the media, and private property as an iron cage for working-class African-Americans.

Wright had begun the novel while still a member of the Communist Party. The Man Who Lived Underground was written just after Wright completed Native Son. Despite the latter’s best-selling success, the manuscript was rejected by Harper and Brothers.  As several scholars have noted, at least one reader for the press described the scenes of police torture as “unbearable.”

Wright then trimmed the manuscript and published it as a short story in the journal Accent in 1942, setting aside the longer manuscript to welcome the birth of his first child, Julia.  In a turn of poetic justice, it is Julia Wright who has years later approached New American Library with the full-length novel and convinced it to publish.

Like Native Son, The Man Who Lived Underground is inspired by a true story, this time of a white unemployed sewer worker named Herbert C. Wright who tunneled into the backs of stores and shops in Hollywood while living underground. In many ways, the book is a deeper and more direct meditation than Native Son on what police abolitionists call the carceral state.

The plot is stark: Daniels is falsely accused, tortured, beaten into a confession, and eventually murdered by police. Yet the book’s genius is to distend this moment into a long nightmare of the Black social imagination. Halfway through his travail, Daniels escapes by crawling into an open sewer cover and disappearing into the underground. There Wright creates a phantasm of horrors meant to illuminate for Daniels, and the reader, something like the totality of the racist capitalist system within which he is both prisoner and fugitive.

In the underground, Daniels hears the voices of an imaginary Black church choir; pokes a dead Black baby floating past in the sewer system; breaks into a realtor’s cash-filled safe laden with cash; watches an imaginary war on earth; sees a brown woman’s body laid out as if for an autopsy; and witnesses the cops who arrested him torturing a white man. The hallucinatory force of vision surfaces this flash of insight:

And then a strange and new knowledge overwhelmed him. He was all people. In some unutterable fashion, he was all people and they were he; by the identity of their emotions they were one, and he was one with them…He now knew too the expressible value and importance of himself. He must assert himself; he was propelled to do something, to devise means of action by and through which he could convince those who lived aboveground of the death-like quality of their lives.

In a powerful essay that is a postscript to the novel, Wright describes Daniels’ psychic journey as influenced by his grandmother’s devotion to Seventh Day Adventism, and by surrealism, jazz, Freudian psychology, and World War II (the underground, he reminds us, was also the place of antifascist resistance).  All of these are by themselves fascinating interpretations. But I think the best explanation of the book lies in Daniels’ observations that “he was all people and they were he.” Daniels learns the mystery of his alienation, the necessity for human solidarity, and the burden of political awareness—of being woke.

Especially critical to his education underground is his revised understanding of capital.  The money he steals from the safe he takes not to spend but in order to contemplate its abstract power over his life.  It represents at once his social labor and his social being, and the need to transform both. “He now knew too the expressible value and importance of himself.”

There are many other reasons to read The Man Who Lived Underground. Fred’s wife Rachel is pregnant with their child and is rushed to the hospital just before he goes underground. The dead children he sees in the underground are disappeared Black people prematurely killed and disappeared by the system. The police suggest Fred may be part of a “Fifth Column,” reminding readers that during World War II the U.S. state feared Black insurrection and treason. The book is also written at a fever pitch as terrifying about the racial conditions of the modern world as anything Wright ever produced. At the end of his preface to Native Son, Richard Wright wrote, “If [Edgar Allan] Poe were alive, he would not have to invent horror; horror would invent him.”  It also invents Fred Daniels.

Wright said of the book “I have never written anything in my life that stemmed more from sheer inspiration, or executed any piece of writing in a deeper feeling of imaginative freedom.”

Finally, Wright’s appended essay, “Memories of My Grandmother,” is an extraordinary riff on the process and meaning of Black writing and Black culture. Fred discovers a typewriter in the underground and pecks out his name just to see it on paper. In this, his appended essay, Wright compares his novel to a blues and jazz song, introducing “improvisation”—Fred’s escape to the underground—as a strategy for Black identity and survival in the world. The essay recalls that Ralph Ellison drew inspiration from Wright’s story for his own phantasmagoric opening to Invisible Man and that Wright himself went “underground” as an artist, leaving the United States for Paris in 1946, in part because he did not want to face the real-life horrors of McCarthyism.

The publication of The Man Who Lived Underground is important for several reasons.  Wright said of the book “I have never written anything in my life that stemmed more from sheer inspiration, or executed any piece of writing in a deeper feeling of imaginative freedom.”  The novel’s visceral attention to police violence may resonate with readers in ways that will renew discussion about Wright’s critical legacy.  Wright’s male-centered literary worldview, deserved criticism by Black feminist scholars, and his sometimes unflattering public skirmishes with literary giants like James Baldwin have cooled his status in African-American letters since his death in 1960.   The persistence of anti-Communism in American culture has also shadowed his career.

Yet Wright should also be remembered as the African-American writer whose publishing success made it harder for mainstream American society to look away from the terrors inflicted on Black Americans, and to ignore the centrality of Black experience to capitalist modernity.  For these, readers might turn to his extraordinary book on the African-American migration, 12 Million Black Voices (1941) or his book on Ghana’s anti-colonial liberation struggle, Black Power (1954).  One day we might also have in print his unfinished and unpublished novel Black Hope, based on interviews Wright conducted with Black domestic workers, and his only book with a female protagonist.

Richard Wright wrote in his autobiography that he broke with the Communist Party in part because it tried to force upon him an interpretation of the world that could not always account for his experience as a Black American. Yet it is impossible to read The Man Who Lived Underground and not recognize what abolitionist socialists today all know: that the carceral state is a front line in the war against the violence, exploitation, and oppression capitalism doles out like money on payday. The book powerfully illustrates how the struggle for Black freedom remains a sounding board for the freedom of us all.