At Volvo Trucks North America in Dublin, Virginia, picket lines stretch along Cougar Trail Road at the entrances to the 300-acre New River Valley assembly plant. Around 2,900 members of United Auto Workers (UAW) Local 2069 have been on strike since June 7 in this small town in the southwestern corner of the state near the West Virginia border. It’s their second strike this year. Just two months ago in April, workers walked out for two weeks after voting down a tentative agreement by a whopping 91 percent. The union went back to the table and again the membership turned down the deal, this time by a 90 percent margin, a resounding rejection. 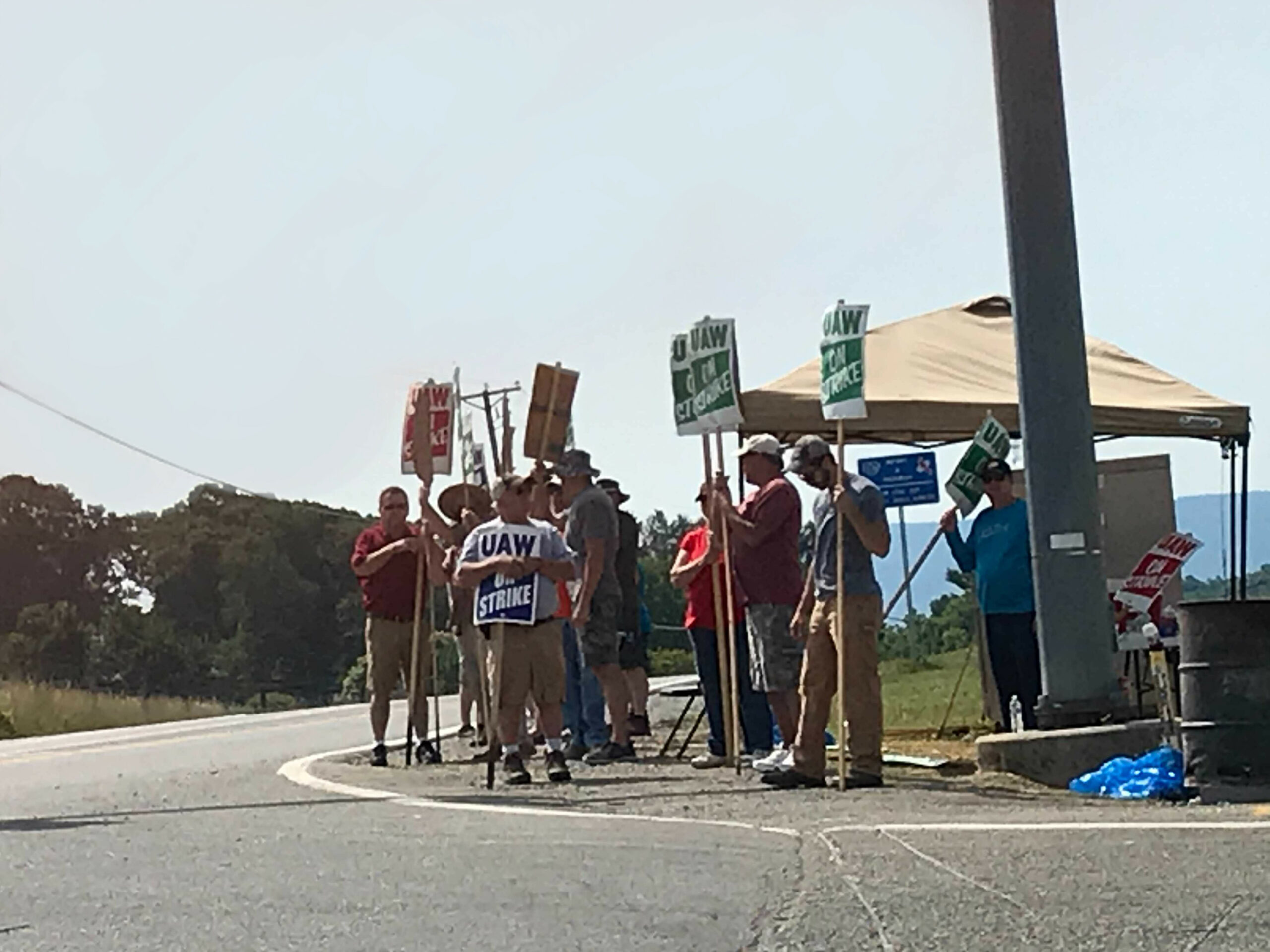 At stake in the agreement are critical issues around the two-tier wage structure, work schedule and overtime, health and safety, and employee and retiree healthcare benefits, among others. The company claims they’ve offered “significant economic improvements for all UAW-represented workers,” but in reality the proposed 12 percent raise over six years falls well below the current rate of inflation. The latest agreement also calls for higher copays and out-of-pocket expenses from employees, including a doubling of the out-of-pocket maximum over the life of the contract. The last contract amounted to hundreds of dollars of added costs for retirees per month, according to a striker family member. The company hasn’t tried to sugarcoat these givebacks, stating bluntly on their website, “The hard truth is that there’s likely not a company left in the United States that can guarantee its people – hourly or salaried – that they won’t have to worry about retiree health care costs, even after 30 or more years of work.”

The union is fighting to abolish a two-tier wage system introduced in previous contracts. Although Volvo claims it will get rid of the tiers “over a reasonable time frame,” members with two years or fewer seniority still wouldn’t reach top pay over the life of the contract. The company is also pushing to change the work schedule to four 10-hour shifts, a move that would cut into overtime pay. Finally, the rejected agreement removed the union’s right to strike at the end of the proposed six-year deal in 2027.

Volvo Group, the Sweden-based parent company, reported a massive jump in profits for the first quarter in 2021 compared to the same period the year before, from $560 million to $1 billion. Their truck business has been strong, driven by increased demand for electric vehicles and the company goal of fully-transitioning to electric vehicles by 2030. Volvo announced $400 million in “advanced technology upgrades,” including building electric trucks. Volvo Car USA, for example, recently announced plans for an increased $118 million in expenses at their Ridgeville, South Carolina, plant to produce an electric car. With these kinds of investment on the horizon, Volvo is undoubtedly looking to pay for these costs at the expense of its workers.

After workers walked off the job on June 7, Volvo did not initially agree to return to the table. In a June 8 interview, Local 2069 president Matt Blondino said, “We will be on the picket line until we have ratified. Going forward we will not be coming off the line until that is done, so whatever that takes, we are willing to be there.” The company finally consented to resume negotiations beginning June 23. Union members disagreed with the leadership’s decision to return to work without a contract after the first strike in April, particularly after such a strong “no” vote on the first tentative agreement.

The Volvo strike is a key part of securing a just transition on labor’s terms.

By forcing a strike, Volvo is imposing harsh conditions on its workers, stripping employees of their healthcare. Meanwhile, the strike fund is paying only $275 a week, a major hardship for workers and their families who’ve gone for more than a month in total this year. Despite this pain, the national union sits on a $790 million strike fund and to date have been unwilling to dip into their war chest. Local 2069’s hall now holds a food pantry where volunteers take donations and serve meals. A poster lists solidarity visits on the picket line, including steel workers, other UAW locals, and various community organizations.

Volvo has felt the strike’s impact across its operations. As the third week of the strike began, their Hagerstown, Maryland plant was compelled to cut back shifts on the powertrain assembly line. The Virginia plant assembles trucks using engines built in Hagerstown. In 2019, a national strike by 3,500 Volvo-Mack workers caused shortages in the other direction, with shutdowns at the New River Valley plant. According to reports, the company stockpiled additional trucks in the run up to the walk-out, but nonetheless the reverberations are starting to be felt across the supply chain. New River Valley management has been forced to rely upon their few nonunion employees. Workers on the picket line say that few scabs have been brought in so far. A large plywood sign denouncing scabs stands on the local’s lawn, facing the massive complex across the busy highway. Volvo has taken an aggressive stance with the pickets, going out of their way to re-survey their property and force the line closer to the road.

The strike at Volvo is significant on several levels. The South occupies an increasingly important strategic position in the union movement, with the shift of auto manufacturing and industry to the region. Recent labor defeats such as the failed UAW organizing drive at Volkswagen in Chattanooga, Tennessee in 2019 and, most recently, at Amazon in Bessemer, Alabama underscore the stakes of the current fight. The corporate turn such as Volvo’s to electric vehicles—and the urgently-needed transition to a sustainable future—poses sharp questions for workers: who will pay the price to avert a climate emergency? Multinationals are eager to re-organize production and ramp up investment in sustainable technologies to remain competitive in the industry; union members and their communities should not be compelled to shoulder the costs. The Volvo strike is a key part of securing a just transition on labor’s terms.

Lee Wengraf is an activist based in New York City, contributing editor to the Review of African Political Economy and author of Extracting Profit: Imperialism, Neoliberalism, and the New Scramble for Africa (Haymarket Books, 2018).