Skip to content
Paul Fleckenstein reports on the struggle to oppose the budget cuts and restructuring at the University of Vermont.

The University of Vermont (UVM) College of Arts and Sciences released a plan for deep budget cuts in late November. The plan is to eliminate 12 undergraduate major programs, 11 undergraduate minor programs, 4 graduate programs, and several departments, claiming that there is no other way to balance the budget. Undergraduate programs pegged for elimination include Asian studies, Latin American and Caribbean studies, Geology, German, Greek, Italian studies, Latin, Classical Civilization, and Religion. Independent fine and performing arts and languages departments face downsizing and consolidation into a School of the Arts and a School of Languages, and the Geology, Religion, and Classics departments face closure altogether.

The cuts have provoked petitions, a car rally, a press conference that drew an audience of more than a thousand, and a unanimous vote of no confidence in UVM leadership by the English Department faculty. Opponents of the cuts have developed a compelling case that they would gut the core educational mission of the university and take an unacceptable human toll. If implemented, the cuts will undermine the multidisciplinary strengths of the university. At a December press conference, award-winning author and former UVM Marsh Professor at Large Alison Bechdel said, “The wide swath of cuts that have been proposed can’t help but damage the intellectual ecosystem at UVM.”

Campus organizers characterize the cuts as a wrecking ball operation without legitimate economic justification. In fact, the cuts are being rammed through despite a positive overall financial outlook and an untapped $34 million “rainy day” fund. 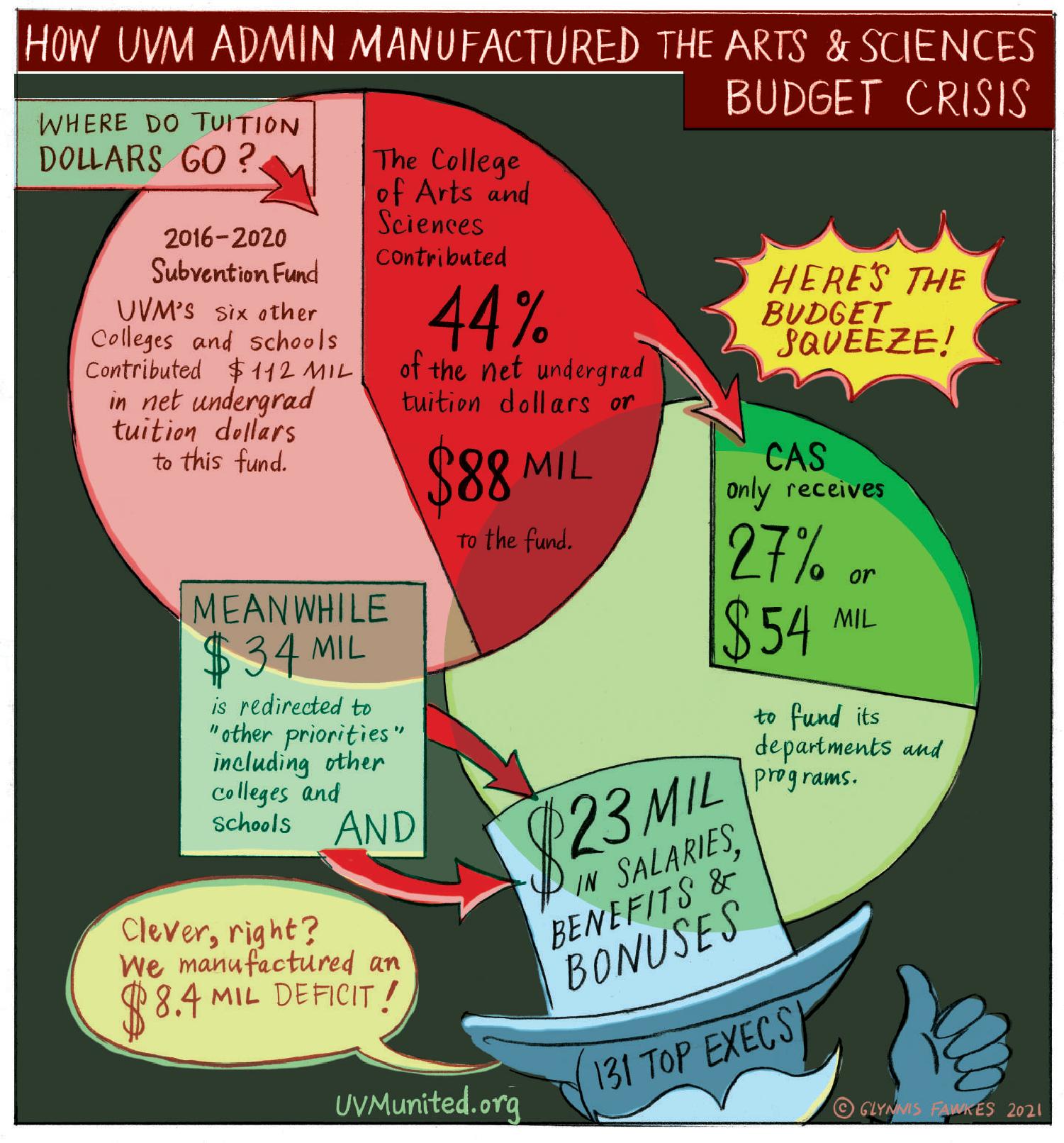 There are lots of things that do not add up. There is the purported $8 million structural deficit in the College of Arts and Sciences versus the larger diversion of funds to other prgrams. There are the extravagant salaries of vice presidents and deans, compared to the modest incomes of the faculty and staff whose jobs are on the chopping block. There is the $235,000 bonus recently awarded to the men’s basketball coach. There is the $95 million that has been allocated for a new sports arena. There is also the $500 million endowment, while $8 million is the pretext for slashing liberal arts and dumping faculty and staff in the middle of a recession.

UVM United Against Cuts is a coalition of students, faculty, staff, and community members formed earlier in 2020 to oppose a previous round of layoffs, pay cuts, and the closure of the Campus Children’s School. The group has since called large organizing meetings to plan coordinated resistance to this round of cuts and restructuring. They have scheduled a day-long teach-in and launched public and faculty/staff petitions. There is a short window of a couple months during which the restructuring plans will be either vetted or challenged. Campus organizers face three related issues: how can the UVM Board of Trustees be compelled to reverse itself, what role will the faculty union play, and how can solidarity build between faculty, staff, and students?

How the bosses decide

The UVM Board of Trustees, the body that signs off on restructuring plans and hires the university president, is well-insulated from democratic influence. The State of Vermont provides only a small fraction of UVM funding, among the lowest in the U.S., so elected representatives in the state government exercise little leverage over the university leadership. Members of the board of trustees include tech entrepreneurs, investment managers, CEOs, management consultants, and business owners from in- and out-of-state.

The board recently hired President Suresh Garimella from Purdue University, who emphasizes his credentials as a seasoned administrator, with expertise in global and corporate partnerships. UVM leadership employs the Huran Consulting Group notorious for its corporate downsizing in higher education.

Arguments from the campus community about the damaging effects of restructuring carry little weight with university leadership, given that these people operate on a regional and national scale regarding students, revenues, governance, and corporate norms. The board and its president have a vision of UVM that does not include much of what many faculty, staff, and students now value, and there is no formal accountability.

Getting the university leadership to reverse the cuts will have to involve something more, including sufficient disruption of business as usual for them to conclude that the cost of going forward is too high. The board of trustees fired President George Davis in 1991 after he failed to quell anti-racist protest that led to the takeover of the Waterman Administration building. The inglorious optics of a university president climbing a ladder to enter an otherwise blockaded building through a window in order to meet with student occupiers was too much for them. The success of the student occupiers helped establish ethnic studies at UVM, the type of programs that are under attack now. However, this student-led action unfortunately had little faculty and staff involvement, which is one of the reasons it is an insufficient model for proceeding in the current more difficult situation.

A central actor in resistance to the budget cuts and restructuring is United Academics (UA), the faculty union at UVM. UA has won improved conditions for faculty, and has successfully fended off repeated attacks from the university administration, often with public contract campaigns that have mobilized faculty, staff, students, and community members.

These are harsh times, and it is clear that UVM bosses are willing to exploit vulnerabilities in the contract wherever possible. For example, UA has won multi-year contracts for non-tenured lecturers since unionizing in 2001, but any lecturer whose contract is up for renewal in a budget-cutting year risks termination. College of Arts and Sciences Dean William Falls described his decision to terminate three senior lecturers, despite their records of outstanding teaching and research, “as a roll of the dice.”

There is a sense of existential crisis at UVM, more widespread than in the past.

Recent contracts conceded the elimination of post-retirement health care for most faculty and granted flexibility to administration to reduce lecturer positions and pay by as much as 25 percent. A five-year College of Arts and Sciences hiring freeze has gutted departments, with the contract offering scant protection against intensifying workloads for remaining faculty.

There are outstanding examples of faculty unions fending off damaging university restructuring. Rutgers University faculty transformed a weak union into a fighting force through intensive face-to-face organizing department by department. The union was upfront that strike readiness was the source of their actual power. They were largely successful.

The University of Illinois at Chicago faculty union mounted a similar aggressive grassroots campaign. They successfully included prospective students and parents, arguing that the quality of education is dependent on faculty working conditions. Organizers at both Rutgers and the University of Illinois embraced a “bargaining for the common good” framework that combined actual or threatened strikes with broad demands that helped secure university worker, student, and community solidarity.

Public sector and education unions in the U.S. were established through disruptive strike action. There is a sense of existential crisis at UVM, more widespread than in the past.  So, it is a promising sign that, despite zero preparation and organizing, a substantial portion of UVM faculty polled in December supported a grade strike (outside the bounds of their contract) to protest the cuts.

Building on the successful first weeks of the campaign to stop budget cuts and restructuring will require broadening participation and support from more people on campus, and deepening resolve to take bigger steps of protest.

Beginning with anti-apartheid protests in the 1980s to the present, leading organizers at UVM has said that “we” are the university. The teachers, the staff, the students—everyone with the interests, knowledge, and capacity, who build, run, and live with the consequences of UVM, we are the university. The main thing UVM bosses cannot do is teach, research, and learn. The main thing they try to avoid as they manage restructuring is collective response from those impacted.

Successful education union campaigns share common features: attention to membership organizing, the use or credible threat of strikes—legal or otherwise—and the solidarity of students, families, and the community based on alternative visions of the future.

Aggressive public action to defend education—even if initially coming from a minority—is key to generating union member support, and active student and community solidarity. It is clear that the current round of cuts at UVM is only part-way to where management wants to go. The resource drain of bloated executive salaries and cost-cutting relate not just to liberal arts but potentially to all other departments and colleges at UVM as well.

Colleges and universities in the U.S. have cut departments, degree programs, faculty, and other staff at a firestorm pace––amounting to 300,000 layoffs in the last year. Frequently, the cuts were not emergency measures so much as “shock doctrine.” These are long-planned restructuring moves, pushed forward quickly with the crisis backdrop of the COVID-19 pandemic and economic recession. The consequences will be long-term degradation of higher education and restricted access, disproportionately impacting working-class students and students of color.

The broader trends behind the restructuring of higher education at UVM and elsewhere include intensifying the role of the university in serving business, establishing profitable technology partnerships, and attracting Pentagon and other federal research dollars. Education is being further segmented into elite schools that retain robust liberal arts on the one hand, and, on the other, a narrower focus on science, technology, engineering, math, and career training for the majority. Resources are siphoned away from the classroom and into management and administration. As a result, upper administration expands its ranks, inflates its salaries, weaponizes budgeting tools, and treats departments as competing profit centers. Faculty are increasingly demoted to part-time and contingent contract workers, while non-teaching staff face a range of top-town impositions and increased productivity demands. The whole enterprise is less democratic and more authoritarian from the top. The human toll is appalling. This process is well underway at UVM.

Stepping back, it is also important to understand restructuring as “neoliberal restoration”. Higher education in the U.S. has always been in the service of elite interests and the capitalist economy. This function was challenged in the twentieth century by an expansion of public funding that led to increased access for millions of working-class students, struggles for gender and racial equity, and unionization of many campuses. These developments significantly broadened learning and teaching opportunities as higher education reflected and contributed to progressive challenges to the status quo.

Nothing required this state of affairs to be permanent. It was the product of the need of the capitalist system for a more highly trained workforce after World War II and an intense wave of social struggle in the 1960s and 1970s. The advances of that era were only won, and can likely only be preserved and expanded, by continued organizing and struggle. Each struggle at UVM and elsewhere can make a contribution to turning back the tide.

Paul Fleckenstein is a member of the Democratic Socialists of America in Burlington, Vermont and the Tempest Collective. He is a labor and environmental justice activist.

Tempest Save our school
Accessibility by WAH
Loading Comments...