Skip to content
Tempest is pleased to re-publish this piece by Gilbert Achcar which first ran in English here, translated from the Arabic original on December 16, 2020, in Al-Quds al-Arabi. Tempest has not previously re-run pieces from other sites, but given the relative lack of reach in the U.S. of the original publication, the importance of this anniversary, some of the more facile and at times reactionary analysis in the mainstream liberal media, and the value and historical awareness of Achcar’s perspective, we are honored to do so. We thank Gilbert Achcar for his permission to run the piece. It has been very lightly edited for U.S. English.

Ten years ago, on 17 December 2010, a young street vendor in the town of Sidi Bouzid in central Tunisia sparked a political firestorm that soon engulfed the whole country, before spreading across the entire Arabic-speaking region, in what has been known since 2011 as the ‘Arab Spring’.

The initial months of that ‘spring’ were euphoric, while a wave of massive protests engulfed the region, culminating in six major uprisings in total, as Egypt, Yemen, Bahrain, Libya, and Syria followed Tunisia’s example. Soon after that initial upsurge, however, the revolutionary wave receded, giving way to a counter-revolutionary onslaught. The Bahraini revolution was besieged and suppressed. The Syrian regime managed to withstand the popular uprising, which turned into civil war until Iran came to its rescue in 2013. A little afterwards, a reactionary military coup took place in Egypt, followed by other setbacks as well as by the outbreak of civil war in Libya and Yemen. This perilous defeat dispelled whatever illusions remained; euphoria gave way to pessimism while many quarters declared the dreams of the ‘Arab Spring’ to be dead.
Both euphoria and dejection though were equally the outcome of superficial impressions in reaction to the revolutionary wave and the subsequent relapse. They both overlooked two fundamental features of the big bang that shook the region in 2011. 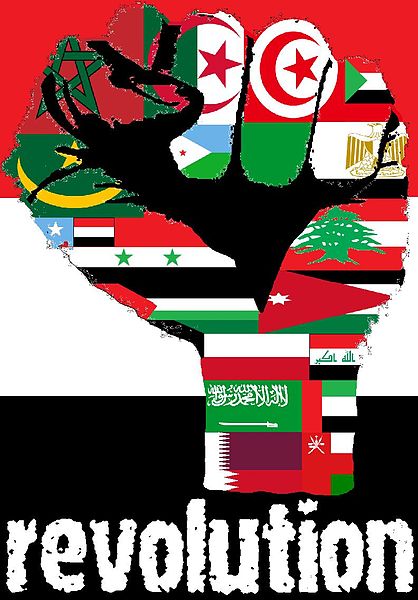 The first feature is that the explosion had deep roots in the intractable structural crisis resulting from the transformation of the dominant social/political system into an impediment to development, causing very low rates of economic growth and hence very high levels of unemployment, especially young and female. The ebb of the revolutionary tide and the reactionary onslaught that followed did nothing to solve this core structural crisis, which continued to worsen under the conditions of political instability that have prevailed regionally since the beginning of the crisis. This means that the events of 2011 were but the beginning of a long-term revolutionary process that will not come to an end until the necessary radical change in the nature of the prevailing political/social system is achieved. Should this change not occur, the region risks sliding into catastrophic decline, heralding a long historical dark age.

The second overlooked feature is the tight control exerted by the political and social system in the Arab region over key levers of state power—especially the armed forces. The widespread expectation in the early months of the ‘Arab Spring’ that the region would witness a ‘democratic transition’ as smooth as that experienced in other parts of the world was based on a naïve underestimation of the solidity of the state’s main body and its repressive backbone, as well as of the readiness of ruling elites to destroy their countries, massacre their populations or drive them out in their quest to preserve their power and privileges—as the Syrian regime has been doing. This naïve misconception was enhanced when cases such as Tunisia and Egypt, where the ‘deep state’ sacrificed its head in order to preserve its foundations until a new head emerged like the tip of the iceberg, were mistaken for ‘the regime’s overthrow’ that the people wanted, according to the famous chant.

The ebb of the revolutionary tide and the reactionary onslaught that followed did nothing to solve this core structural crisis…This means that the events of 2011 were but the beginning of a long-term revolutionary process that will not come to an end until the necessary radical change…is achieved.

Taken together, the two features lead to the conclusion that the change that the region needs to overcome its chronic crisis requires leaderships, or leading organs of the popular movement, of a high level of revolutionary determination and loyalty to the popular interest. Such leaderships are indispensable to manage the revolutionary process and overcome the difficult tests and challenges that must be inevitably confronted in the drive to defeat the existing regimes by winning over their social base, both civilian and military. Leaderships are required that can rise to the task of overseeing the transformation of the state from a machine of social extortion on behalf of the few into a tool that serves society and its toiling majority. As long as such leading organs have not emerged or prevailed, the revolutionary process will inexorably carry on through phases of ebb and flow, revolutionary upsurges and counter-revolutionary backlashes.

The first decade of the Arab revolutionary process confirmed that it is indeed a long-term process. The failure of the ‘Arab Spring’—with civil wars in three countries, and the reinstitution of the ancien régime with a new face, an even uglier one in the case of Egypt—did not bring social stability to the region at all. Social eruptions and political protests continued to occur in one country after the other, and in different regions within each country, as happened in Morocco, Tunisia, Egypt, Sudan, Jordan, Syria, and Iraq, and so on.

Eight years after the first revolutionary wave, the region witnessed a second inaugurated by the Sudanese uprising that started two years ago, on 19 December 2018. It was followed in 2019 by the Algerian Hirak and the uprisings in Iraq and Lebanon. In total, ten Arab states have seen uprisings over the past decade, meaning that close to half the region’s countries and the vast majority of its population have gone through massive revolutionary outbreaks. Moreover, nearly all other Arab countries have seen a marked increase in social and political protest over the past decade. While it is true that the Covid-19 pandemic has impeded the existing social struggles and inhibited the emergence of others, its impact will not last, all the less since the ensuing exacerbation of the regional economic crisis can only further fan the flames of popular outrage. 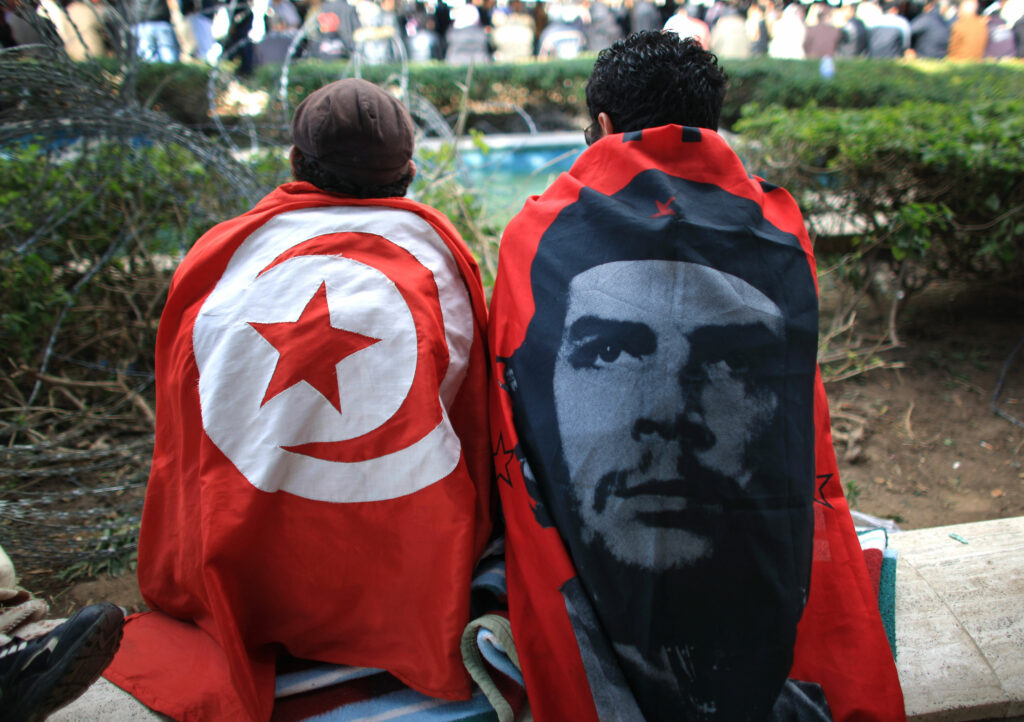 The greatest challenge facing the present generation of revolutionaries, who became politicized in the course of the uprisings, and the fundamental prerequisite for their ability to transition from uprising to successful revolution, lie in the aforementioned issue of leadership, in both its organizational and political dimensions. Not only in the Arab region, but across the world, the new rebel generation is rightly wary of old political and ideological formations, knowing how they ended in bureaucratic authoritarianism or individual leadership, and how they betrayed the principles they had claimed to embody in order to accommodate to various types of social, political, and cultural oppression. The new rebel generation is thus keen on maintaining a horizontal grassroots structure, rejecting hierarchical centralism and opting instead for network-like coordination, in a manner best represented by Sudan’s Resistance Committees.

Politically, like all other long-term revolutionary processes in history, the regional process is cumulative. Each generation draws lessons from its experiences and failures, lessons that are transferred from one generation to another, and one country to another, within the same protracted historical process. Thus, we have seen how the second revolutionary wave—or what some commentators dubbed a ‘Second Arab Spring’—did avert the illusions that marred the earlier wave. One need only compare the three countries in the region that are characterized by the primacy of their military establishments: Egypt, Sudan, and Algeria. While in 2011, and later in 2013, illusions about a ‘savior’ role of the military establishment did prevail in Egypt, the later popular movements in Sudan and Algeria both avoided this pitfall and reasserted their demand of civilian government as a precondition for democracy. Likewise, the movements in Iraq and Lebanon both managed to avert falling into the trap of sectarian strife that had long been used by ruling groups to divide the people and consolidate their hegemony over it.

Each generation draws lessons from its experiences and failures, lessons that are transferred from one generation to another, and one country to another, within the same protracted historical process.
To be sure, there is still a long distance to be covered from the current state of the popular movements, the youth movements in particular, to the fulfillment of the new generation’s progressive revolutionary aspirations. Meanwhile, the reactionary Arab order continues to build up its countermeasures, while its leaders connive to confront the regional revolutionary process. The path to the desired revolutionary salvation is long and arduous, but the determination to take it is enhanced by the awareness that the only alternative is ignominy and extinction.

Gilbert Achcar is a professor of development studies and international relations at SOAS University of London. His most recent books are Marxism, Orientalism, Cosmopolitanism (2013), The People Want (2013) and Morbid Symptoms: Relapse in the Arab Spring Uprising (2016).