Skip to content
Tempest has been invited to participate in an international roundtable debate on the war in Ukraine. It is sponsored by Marxists Organising for Revolutionary Ecosocialism (MORE) who are an international collective formed by Reform & Revolution in the US, RISE in Ireland and Lernen im Kampf in Germany. 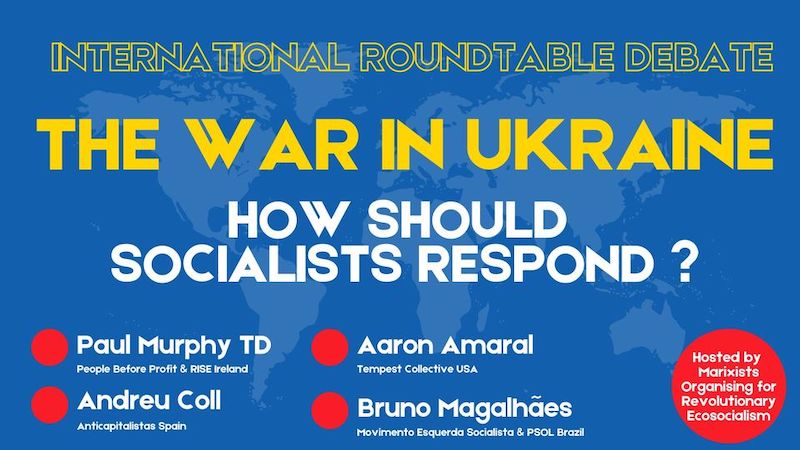 The war in Ukraine has sparked intense discussion and debate among socialists and Marxists worldwide about how to understand and respond to this war. Should socialists support or oppose NATO governments sending weapons and military aid to the Ukrainian government? What is an internationalist and socialist strategy to avoid a catastrophic nuclear conflict, end this war, and defend the interests of the working class and the democratic right to self determination?

To facilitate this debate, MORE are bringing together a roundtable discussion. Marxists internationally have generally taken two different perspectives. While there is general agreement that this war involves questions of self-determination of Ukraine, Russian imperialism, and Western imperialism, there has been significant disagreements about what conclusions should be drawn. Some argue that socialists around the globe should support the struggle for self-determination of Ukraine and therefore support military aid by the US and other Western countries; others argue that in this inter-imperialist proxy war socialists, for example in the US, have to oppose Biden’s billions in military aid to the pro-capitalist, pro-NATO Zelensky government.

Based on mutual respect for the different opinions of Marxists, this debate with representatives of both sides aims to clarify the issues and contribute to a better Marxist understanding of the challenges involved.

It is open to all to attend and there will be space for questions, comments and contributions as well. To attend simply sign up at https://cutt.ly/ukraineroundtable and we will send on the zoom link for the meeting and a reminder.