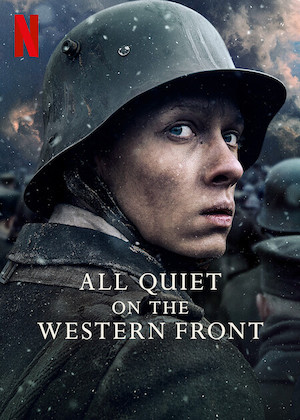 All Quiet on the Western Front

The French New Wave director François Truffaut famously said that “there’s no such thing as an anti-war film.” If this statement is true in 99 out of 100 cases, Edward Berger’s new Netflix adaptation of “All Quiet on the Western Front” is the exception that proves the rule.

Far from just being about a nightmarish crisis in history, the movie should serve as a warning for the present, as the forces that drove the imperialist countries of Europe into war in 1914 are the very same that dominate the planet today. More than a century may have passed, but the inter-state capitalist competition that caused the world wars still threatens humanity with unthinkable horrors.

I began watching with very low expectations, suspicious that a Netflix production would be more interested in making a spectacle than being faithful to the source material’s thoroughly anti-war content. Films that take on appalling and cruel real-life histories often demonstrate an ambivalent motivation, a questionable morality. At their worst, these films trivialize horrors into spectacles for the sake of titillating entertainment. On the other hand, when done with care, they can act as important vehicles through which we can collectively make sense of the nightmares that constitute our history. “All Quiet on the Western Front” falls firmly into the latter category, and given a stomach and heart that have steeled themselves for a couple of difficult hours, I can’t recommend it enough.

In a sense, to watch “All Quiet on the Western Front” is to see the capitalist world distilled into its purest, most raw expression.

The movie is based upon a well known German book that was translated into English under the same title used by the film. Originally published in 1928 as “Im Westen nichts Neues”-translating literally as “In the West Nothing New”—the book sold 2.5 million copies in 22 languages in its first year and a half of publication. Once in power, the Nazis, who wanted to glorify the German war effort in World War I, had it banned and burned.

There seems to me to be two overarching and connected themes in the movie. The first is the total absurdity of the war. The armistice is called to begin at 11 a.m., a bugle sounds to mark the hour, and people who had been in mortal struggle seconds before walk past each other in the trenches as if they were passing one another on the sidewalk. The second theme is the stark contrast between the lives of those in the trenches on the one hand, who, nearly starving, are forced to fight and die, and the lives of the great leaders of men on the other, who complain to their waitstaff about being served day-old croissants as they sip tea from gold-plated china.

This example serves well to highlight the class content of the war, which was caused in the first and last instance by the inner dynamics of capitalism. It cannot be understood if divorced from this perspective.

The fifty year period before the beginning of World War I saw the “peaceful” expansion of capitalism in Europe. “Peaceful” is inserted into scare quotes here since peace only existed in a very general sense in Europe. Capitalism still brutally exploited the lower classes at home, and outside of Europe, the European imperial powers raced to grab, by means of mass theft and murder, as much of the world for themselves as they possibly could. Capitalism requires constant expansion, and new colonies were necessary to keep the capitalist economies healthy.

But of course, the earth and its resources are finite. Eventually a situation emerged in which, as Lenin put it, “The world is completely divided up, so that in the future only redivision is possible,” i.e., territories can only pass from one “owner” to another, instead of passing as ownerless territory to an owner.”

Britain, and to a lesser extent France,had been the world’s dominant imperial powers in the last century. But the nature of capital is that its favor is fickle, and as time passes and conditions change, its black light shifts to shine upon countries that yesterday played a secondary role in the world economy. In the early 20th century, Germany was the new industrial power, late to the colonial game, and looking to carve out more of the world for itself. But in the age of imperialism, this could only happen at the expense of other imperial powers, and that meant armed conflict to take new colonies from rivals by force.

This movie should fill us with rage, not just at the horrors the ruling class put ordinary people through in World War I, but about the brutal rule that this class has in store for us. Inter-state competition constantly drives us closer and closer to a conflict that has the potential to turn nuclear, while a new existential threat like climate change, which has the potential to end billions of lives, lurks just beyond the horizon. Already we can feel its first effects.

The story of the main character of “All Quiet on the Western Front,” Paul Bäumer, is not unique. 17 million people lost their lives in World War I, and millions more had their lives brutally crippled. In a broader sense, Paul and his comrades’ story is just one more among countless billions, about lives that have been crushed into nothing in the great capitalist meat grinder. In a sense, to watch “All Quiet on the Western Front” is to see the capitalist world distilled into its purest, most raw expression.

One recalls the words scrawled in spray paint on the walls of a store in Minneapolis in late May of 2020: “When our turn comes we will make no excuses for the terror.” This film reminds us that the global bourgeoisie has well earned this threat. We should never forgive them, and we should never forget.

Thomas Hummel is a member of the Tempest Collective living in New York City.