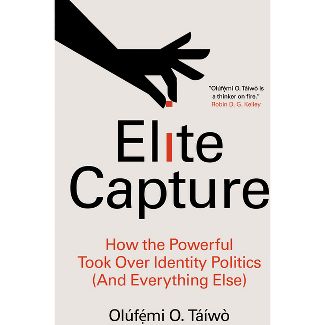 An oft-cited survey conducted by Monmouth University in the summer of 2020 cataloged substantial support for the Black Lives Matter Movement. At the time the survey was conducted, a majority surveyed believed the actions taken by protestors in the wake of George Floyd’s murder were justified. This included the burning of a Minneapolis police precinct where the four officers responsible for Floyd’s death worked. But just two years later, the political winds have changed, enabling President Biden to tout his “fund the police” budget proposal. Among other allocations, the proposal earmarks “$30 billion in new mandatory resources to support law enforcement,” and Biden has allowed states and municipalities to redirect their remaining COVID-19 stimulus funds to police departments. How is it that a movement which brought 26 million people into struggle could be rendered impotent in such a short period of time?

Olúfẹ́mi O. Táíwò offers insight into this question in his new book Elite Capture. Recently published by Haymarket Books, Elite Capture explores what debates about cultural wokeism only seem to mystify. For Táíwò, ideas are shaped by social structures, and like resources generally, ideas are constructed and allocated to meet the interests of those with wealth and power. As such, popular support for defunding carceral institutions and instead funding institutions of the common good has been replaced by Capital’s symbolic gestures on a largely cultural terrain. This shift away from redistributive outcomes and towards almost exclusively representative outcomes fails to mitigate the harms in response to which Black Lives Matter emerged. Perhaps the most acute example of this phenomenon is captured by the famed photo of Nancy Pelosi draped in kente cloth, as she leads fellow congressional Democrats to take a knee in the newly rebranded Emancipation Hall.

According to Táíwò, the problem is not that Pelosi is a jerk (she is), nor that elites conspired to redirect the aims of the movement (they did), but also that ideas are neither static nor neutral. Instead, they are shaped by social arrangements. It is precisely because the elite and the powerful oversee the channels of public expression that the wave of anti-oppression struggles that swept 2020 has been, to a great extent, redirected into a neoliberal flavor of multiculturalism. In part, this is how we arrive at a moment saturated with the kind of corporate identity politics that allows Florida Governor Ron DeSantis to rebrand himself as a fighter for the silent majority over the corruption of “woke CEOs”.

Táíwò defines “elite capture” as “the increasing domination of elite interests and control over our social system” (21), and argues that “identity politics” and “wokeness” also fall victim to this domination. According to Táíwò, “Elite capture happens when the advantaged few steer resources and institutions that could serve the many towards their narrower interests and aims” (22). Drawing on an extended metaphor, Táíwò notes that this capture occurs on all social levels and in rooms large and small; from the White House Situation Room to the local organizing room, ideas are generally redirected in the interests of the elite representatives present in each of these spaces.

It is precisely because the elite and the powerful oversee the channels of public expression that the wave of anti-oppression struggles that swept 2020 has been, to a great extent, redirected into a neoliberal flavor of multiculturalism.

One of the most insightful contributions the book offers is its demystification of how elite capture works. Táíwò begins by explaining that all communication depends on a shared set of understandings. Without this assumed “common ground,” any dialogue would be near impossible; nevertheless, common ground ideas are developed in a social context in which “trust, respect, and authority” are not distributed “in fair and just ways” (42). As such, people often accept common ground beliefs they may not wholly agree with because doing otherwise may elicit punishment over reward. Táíwò reminds readers that people play along with coercive systems because they must, and that even the process of playing along has an impact on a person’s ideas. Moreover, although the oppressed hold uniquely situated knowledge, that knowledge is less likely to enter the common ground. According to Táíwò, “value capture” describes the ways emancipatory ideas are transformed as they enter the common discourse. Value capture is a process “by which we begin with rich and subtle values, encounter simplified versions of them in the social wild, and revise our values in the direction of simplicity—thus rendering them inadequate” (52). It is through this process that activists’ most emancipatory visions can be reduced to hollow gestures on the part of “woke” capitalists.

Having established the process by which elites capture language and ideas, Táíwò turns to discuss both movement practices that enable and movement practices that temper elite capture. In doing so, he directs a critical eye towards deference politics. Táíwò defines deference politics as practices that consider it “a step towards justice to modify interpersonal interactions in compliance with the perceived wishes of the marginalized” (69). Táíwò is careful to note that the intent of practices that ask us to “center the margins” and “take up less space” is meaningful; however, the outcomes of these practices do not necessarily mirror that intent. Táíwò reminds readers that the representatives of oppressed identities who make it into the board rooms are likely to reflect middle-class or even elite interests. As a result, he argues it is equally important to change the rules that govern “what happens in the room” as it is to challenge “the rules about who has access to the room.” Importantly, Táíwò notes that deference fails as a political strategy in organizing rooms as well. Certainly, it is essential that organizers engage with one another in ways that value the uniquely situated knowledge and experiences marginalized people bring with them. Nevertheless, deference as a political strategy is symbolic and tokenizing at best and distorting of redistributive aims at worst. Táíwò argues,

“Deference as a default political orientation can work to counter marginalized groups’ interests. We are surrounded by discourse that locates attentional injustice in the selection of spokespeople and book lists taken to represent the marginalized, rather than focusing on the actions of the corporations and algorithms…” (72).

If ideas and values, like all resources, are captured by the elite over time, what recourse do the oppressed and marginalized have? Táíwò offers three guiding principles in response. First, he argues that recognizing and understanding elite capture can help organizers avoid it and its demoralizing effects. Second, he argues that building intentional structures of knowledge production and political education can counter elite ideologies. Táíwò offers the work of Pablo Freire and of the African Party for Independence’s (PAIGC) education programs as two examples, suggesting that the development of consciousness is foundational to any liberatory project. Relatedly, Táíwò insists that effectively resisting elite capture requires collectivity. He writes,

“Often when we organize, we try to build a smaller system of our own…that is influential enough to change the whole system’s behavior. This is a potential role for a mass movement, a worker’s party, a set of direct actions” (103).

Finally, Táíwò calls for the centering of constructive politics—campaigns, strategies, and tactics that ask organizers to build something collectively: “A constructive politics is one that engages in the task of redistributing social resources and power rather than pursuing intermediary goals cashed out in symbols” (84). This approach, Táíwò suggests, allows for cultivating a politics of solidarity more effectively than practices of deference.

Elite Capture offers a philosophical rendering of ideological production. The book remains a useful resource for anyone trying to make sense of the present political terrain.

Additionally, the book offers an important intervention into debates about identity politics on the Left. At the same time that Táíwò criticizes what we might consider neoliberal identity politics, he also affirms the significance of standpoint epistemology and anti-oppression struggles. Situating the term identity politics within its historical origins, Táíwò reminds readers that it was the Combahee River Collective, “an organization of queer, Black feminist socialists,” who first coined the term “and that it was supposed to be about fostering solidarity and collaboration,” not about “closing ranks” or narrowing the field of struggle (6-8). Táíwò’s excavation of the term is particularly useful in a political terrain that often offers reductive politics of classwide demands as an alternative to identity-based anti-oppression struggles. Elite Capture reminds readers that only the coupling of these two approaches can bring about liberatory change.

Táíwò’s excavation of the term is particularly useful in a political terrain that often offers reductive politics of classwide demands as an alternative to identity-based anti-oppression struggles. Elite Capture reminds readers that only the coupling of these two approaches can bring about liberatory change.

Despite its many useful contributions, a shortcoming of Elite Capture is that the work undersells the role of mass action in shifting common sense ideas. Anyone who has ever walked a picket line, participated in a mass protest, or even supported a mass strike in their job sector knows the transformational power that these experiences can have (even if temporary). Extending a metaphor, Táíwò ends Elite Capture by calling on readers not only to build new rooms, but also to build an entirely new house. He is less clear about what that new structure entails, or what kinds of “checks and constraints” are necessary to sustain it (32). The absence of this specificity is not unique to Elite Capture. Broadly, the Left finds itself in a moment where the organizational structures of the past no longer seem to suffice; nevertheless, political interventions such as Táíwò’s go a long way in helping the Left to think through the kinds of practices that will genuinely advance our emancipatory aims.

Eric W. Maroney teaches English at Gateway Community College in New Haven, Connecticut. He is a member of the Tempest Collective.