Skip to content
Joe Allen analyzes the recent “yes” votes for Mayor Lightfoot’s Bally casino proposal as part of the narrowing horizons for the socialist alderpeople.

Chicago’s pugnacious Mayor Lori Lightfoot won a major political victory on May 25 when the city council voted 41 to 7 for global entertainment giant Bally’s proposal to build a $1.74 billion casino and resort in Chicago, the first of its kind in the city. The casino will be built in the River West neighborhood where the Chicago Tribune printing plant and newsroom are currently located. It is as central a spot in the city as you can get for the mega hotel-gambling complex.

Promising to solve Chicago’s perennial budgetary woes through increased tax revenues and employment, Bally’s also offered to pay upfront $40 million towards the city’s chronically underfunded police and firefighter pensions. An array of labor unions, including the Chicago Federation of Labor and the hotel workers union, dropped their initial opposition and campaigned hard for the casino, after they were assured that Bally’s would sign a union contract.

As in cities and states across the U.S., legalized gambling has been hailed as a long term financial fix by many, it was also seen by critics as both a quick (and unsustainable) fix and one based largely on regressive taxation. And in Chicago, it is just another in a long list of boondoggles that have been pushed by the city’s Mayors for the past two decades and rubber stamped by a compliant city council. A few stand out, however, including the parking meter scandal, selling off Chicago’s skyway, and the Sterling Bay’s “Lincoln Yards” development planned for the old Finkl Steel yard, which could cost city taxpayers over $1.3 billion before it is finished.

Big developers have been making a fortune off of these scams for a long time at the expense of working class Chicagoans. The Chicago Teachers Union (CTU) specifically targeted Sterling Bay during their 2019 strike as an example of tax dollars going to big developers at the expense of public schools. Chanting “Choose Schools over Sterling Bay” protestors were arrested outside Sterling Bays’ West Loop headquarters. CTU President Jesse Sharkey was later criticized by leaders of the building trades for highlighting Sterling Bay’s sweetheart deal with the city.

In the short-lived “debate” before the final city council vote on the casino project, one alderperson Byron Sigcho-Lopez took on Lightfoot and she didn’t like it.

“I think as legislators we have the responsibility to review this process, a failed process, in an administration that is more worried about campaign contributions than doing the right thing for the city of Chicago,”

Sigcho-Lopez said. Lightfoot exploded in rage at him, that even for Lightfoot was unique. Lightfoot yelled:

“You are a liar! You are a liar here! I sit here and I will not tolerate you besmirching the hard work of so many people who have worked on this! Almost every word that comes out of your mouth after you say your name is a lie!”

Sygcho-Lopez , the alderperson for the 25th Ward in Chicago, was the lone socialist out of the six socialists—all members of the Democratic Socialists of America (DSA)—on the city council to publicly dissent and vote no on Bally’s casino project. Why wasn’t Lightfoot screaming at all of them?

Among the seven “no” votes for the casino was Alderperson Ed Burke, the most corrupt—and still serving—member of the city council. It’s doubtful Burke has had a late-in-life moral conversion. Based on recent history, including a pending federal trial, it’s fair to imagine that Burke’s no vote flows from him and his law firm not getting a piece of the casino action. How can the odious Burke vote no but socialists— especially, when casinos are the worst example of predatory capitalism that one can imagine—and progressives vote yes?

Part of the answer is the role of the Chicago Federation of Labor (CFL). Dominated by the building trades, the CFL has supported every major construction project in the past three decades, despite the devastating gentrification such projects have inflicted on the city. Even more important was the role of Hotel and Restaurant Employees Union (HERE) Local 1 in pushing a yes vote for the casino, which represents largely workers of color across Chicago and Northwestern Indiana.

“Jobs, Jobs, Jobs” is a club that many unions…use to justify this corporate-led development that has, in the whole, depleted city coffers and been a boon to the rich… Had Chicago’s socialist alderpersons spoken with one voice in opposition, they could have collectively offered alternative proposals…

“Jobs, Jobs, Jobs” is a club that many unions, including Local 1, use to justify this corporate-led development that has, in the whole, depleted city coffers and been a boon to the rich. The opportunity was lost to challenge this failed approach. Had Chicago’s socialist alderpersons spoken with one voice in opposition, they could have collectively offered alternative proposals for economic development, such as the DSA-supported Green New Deal. But, Chicago’s socialist alderpersons have rarely provided a consistent pole of opposition in the city council.

Mayor Lori Lightfoot submitted her first budget in 2020, following the national uprising against racism in response to George Floyd’s murder and during the first year of the pandemic. In a blistering commentary the Chicago DSA chapter said the budget “preserves the white supremacist power of the Chicago Police Department and further burdens working class people with regressive taxes and fines, which in a time of pandemic will lead to more displacement, debt, and death.”

Lightfoot’s 2020 budget only passed the city council because of a handful of votes including Andre Vasquez and other so-called “progressives.” Despite the hue and cry from many DSA members to expel or censure Vasquez from DSA, there were no political consequences for his actions. Many of Vasquez’s fellow socialist alderpersons were critical of his budget vote, yet, the following year all of them voted for the sham police oversight ordinance. While Lightfoot initially opposed the Empowering Communities for Public Safety (ECPS) ordinance, she was able to turn it into a political victory.

The 2022 Chicago budget debate and vote represents the consolidation of a trend among the socialist caucus. While Ald. Rossana Rodriguez Sanchez deserves credit for pushing the “treatment not trauma” additions to the budget, her original proposal called for $10 million in spending that was cut to $6.3 million. At the same time, the police budget was increased by $200 million bringing it up to nearly $1.9 billion, making it the “second-richest municipal police force in the country” behind New York City. With Jeanette Taylor and Byron Sygcho-Lopez dissenting, the rest of the caucus—including Rossana Rodriguez and Andre Vasquez—voted for it.

The Chicago DSA issued a statement, largely excuse making, in defense of the caucus vote:

“The Democratic Socialist Caucus not voting as a bloc is a reflection of such compromises inherent to a budget crafted by capitalist forces, as well as the realities of acting in coalition while maintaining independent opinions and being responsive to one’s constituents.”

“Despite the budget’s wins, the vote on an amendment to the 2021 budget, which the Socialist Caucus voted no on uniformly, will give 63% of rescue funds to banks to pay down city debts. Millions of dollars that could fund Chicago communities will go to Wall Street instead.”

It’s hard to see how anyone can describe this a “progressive budget” and defend voting for it. The Chicago Afro-Socialists and Socialists of Color Caucus hits the nail on the head:

“This [budget] deal has the echoes of past socialists entering into compromises with liberals that led to failed instances of carceral and imperial social democracy—where liberals get their cops, military and prisons while socialists get social welfare programs. We can’t fall prey to these kinds of compromises. It makes for bad political strategy and more importantly it fails to get the relief our communities need.

If this is the future of compromises we on the electoral left choose to make, then we need to rethink our approach. There is just no meaningful path to working class freedom if we have to give police and prisons a large boost in funding in order to get one year of contingent funding on important and vital programs such as affordable housing, mental health clinics, violence prevention and other services.”

Right now, Chicago politics is being shaped by the upcoming 2023 election cycle in Chicago. The Mayor and all of the alderpersons are up for reelection. Few, if any, have decided to buck the big developers, their financial backers, and those labor unions that are in the big developers’ pockets. They’ve taken the line of least resistance to the Chicago political establishment.

A recent report led by Dick Simpson, a long time critic and author of several books on Chicago politics, reveals a disturbingly high level of support for Mayor Lightfoot among socialists and progressives. See charts below. 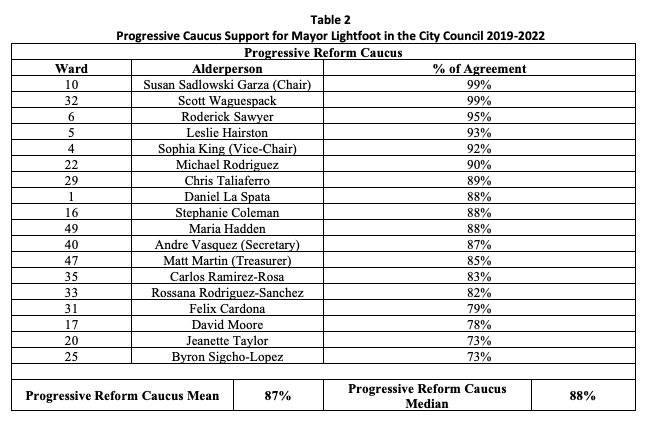 Compare the Chicago socialist caucus and Andre Vasquez—who are also members of the Progressive Caucus—to Seattle Socialist Councilperson Kshama Sawant, who has faced never-ending wrath of the Seattle political establishment backed by the tech giants, and defeated them in the latest recall battle.

Election campaigns are seen by many DSAers as one method of building working class power. Some mistakenly see it as the primary method. But, the record demonstrates the opposite to be true. Instead of reshaping politics in the interest of Chicago’s working class, the political establishment has reshaped the socialist caucus. One symbolic example Last year, the Chicago city council voted themselves a pay raise; while a handful of alderpersons rejected the pay raise, none of the Chicago socialists did, according to the Chicago Tribune. Being a Chicago alderperson is considered a part time, yet it pays $123,000 per year.

In the euphoric months following the victory of the Chicago socialists in 2019, the newly formed socialist caucus declared:

We’re a diverse group of alderpeople representing 21 of Chicago’s 77 communities. We center working class Chicagoans and movements for justice in our legislative work. We organize collectively – not act individually. We know that it is through bringing together working class communities from across Chicago that we can achieve the power needed to defeat rich and powerful special interests at City Hall. After all, bringing together working class Chicagoans to defeat special interests is how we all got elected. We are the Democratic Socialist Caucus of the Chicago City Council, and we are fighting for a Chicago for all.

The recent casino vote points in the opposite direction.

Joe Allen is a long-time labor activist and writer, and is a member of the Tempest Collective Steering Committee.