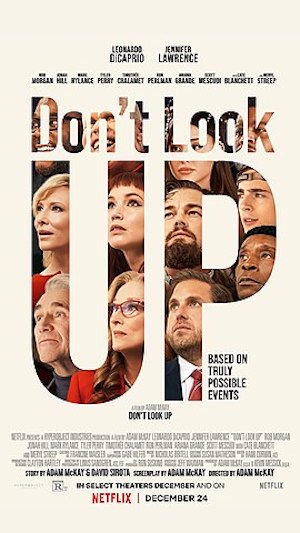 Ricardo Gabriel: Don’t Look Up is a brilliant and forceful critique of climate denialism and false climate solutions, corporate greed, U.S. politics, and the media industry. It is no wonder why many in the corporate media have given it poor reviews or are focusing on the behind-the-scenes antics of the star-studded cast instead of the ideas and messages in the film. This is as frustrating and ironic as it is predictable since the absurdity of celebrity culture is another central theme in the film. For a political satire meant to address a real existential threat, there is just the right amount of comic relief. And if the film is depressing at times, it’s because it does an effective job imitating real life. For a Hollywood movie, Don’t Look Up is surprisingly useful for organizers fighting for radical climate action and societal transformation, and this is what I think we should be focused on.

The film resonates strongly with the popular, working-class sentiment that the government and the rich only care about themselves. It ridicules the idea that supposedly “visionary” billionaires and capitalist market-based solutions will save us from climate catastrophe. That alone is a critical and desperately needed intervention in popular culture. But the film also reflects the reality that well-intentioned scientists simply do not possess the power to save us on their own. In fact, the film shows how easily individuals can be repressed by the state—as with Kate Dibiasky (played by Jennifer Lawrence), and Dr. Teddy Oglethorpe (Rob Morgan)—and co-opted, as in the case of astronomy professor, Dr. Randall Mindy (Leonardo DiCaprio). Once “America’s Sexiest Scientist” allowed himself to become a brand and was embraced (literally and figuratively) by people in power and started working within the system, he began “drinking the Kool-Aid” and softened his stance.

It ridicules the idea that supposedly “visionary” billionaires and capitalist market-based solutions will save us from climate catastrophe. That alone is a critical and desperately needed intervention in popular culture.

There is too much interesting social commentary in the film to unpack in this short review. However, the main takeaway for me, and the one I center in my conversations with people about the film, is that no one is coming to save us. Only we can save us. The only way to avert total disaster is to build a mass movement strong enough to take power away from the capitalist class and fundamentally change our economy and our way of life, especially in the Global North.

Thomas Hummel: There’s far more to commend in the politics of Don’t Look Up than to criticize. The film captures the insanity of the times we’re living in, and if there’s any truth in the pervasive criticism that the satire breaks past the meridian of good taste into unbelievable caricature, it’s because the social and political reality we find ourselves in is already so insane.

The film is far from politically flawless though, and its oversights are worth pointing out. There’s an unstated premise ushering the viewer toward the belief that the crazy ideas of the ruling class are of primary importance in explaining the crisis of climate change and emerge out of nothing but their own personal insanities. The reality, however, is precisely the opposite. The crazy ideas emerge as an attempt to reconcile the fissure created within the self-congratulatory utopianism of the ruling class by their structural and material inability to handle the climate crisis.

It’s no surprise to discover then, that the co-writer of the film is David Sirota, a social democrat, an editor for Jacobin, and a former speechwriter for  the Sanders campaign. Social democracy is premised upon the idea that all that’s necessary to achieve social change is to replace those at the top of the pyramid with people who have the right ideas. It’s largely blind to the structural and material determinants that prevent anyone, regardless of their politics, from making the kinds of changes we need while at the head of the capitalist state.

Adam Turl: When we, as Marxists, are evaluating cultural works, it is important to ask what our starting point is. All art is, of course, political. All art is part of the contest between ideology (false consciousness, the ideas of the ruling class) and class consciousness. But as Leon Trotsky famously noted, art has its own logic. It has this particular logic, as the Marxist art critic Ernst Fischer argued, because of art’s unique place in the origin of human social and biological development. The roots of art are in the projection of human imagination on the unanswered questions of life, and how this is tied to the movement of persons through life (expressing the being of life). Therefore, art has both a collective social as well as an individual expressive aspect. In this sense, no artwork can be ideologically flawless, because art is as much about how we experience the world-as-is as it is about transcending, in some way, the limits of the world-as-is.

Writer-director Adam McKay’s Don’t Look Up, in terms of its overall narrative, brilliantly satirizes the world-as-is, how we—as noncapitalist subjects—repeatedly experience disaster capitalism as profoundly absurd. A comet hurtles toward Earth. The comet can be and is about to be destroyed, averting disaster. But instead, the decision is made to mine the comet. Or, a new virus appears. It can be isolated and stopped with political will and modern science. But it is not stopped. Because “economy.” Climate change can be stopped or mitigated… But isn’t. Because… And on and on.

Far from being hopelessly liberal, it is more accurate to describe the film as left social-democratic, or even a film with a Popular Front sensibility. I am referring here to the political strategy of the Communist Party in the 1930s to seek a rapprochement with the so-called “liberal” wing of the capitalist class. While the political strategy was a disaster, the Popular Front in the U.S. had an often positive impact on popular culture, producing contradictory critical works and shaping post-war visual arts, science fiction, noir cinema, underground comic books, and subcultures. This puts Don’t Look Up far to the left of most current Hollywood fare.

Don’t Look Up brilliantly satirizes the world-as-is, how we—as noncapitalist subjects—repeatedly experience disaster capitalism as profoundly absurd. A comet hurtles toward Earth. The comet can be and is about to be destroyed, averting disaster. But instead, the decision is made to mine the comet.

McKay and co-writer David Sirota’s filmic targets are clearly conditioned by social position and class, as are the heroes of the film. Jonah Hill’s character makes this explicit in his Trumpian blather. President Orlean (Meryl Streep) isn’t even a knock-off of Trump alone, but an amalgam of both Trump and Hillary Clinton. In Don’t Look Up, it is not just the right-wing that “does the wrong thing” but liberal journalists, media, and internet celebrities. Even the effort to stop the comet by other world powers only goes forward when the U.S. refuses to share mining rights. McKay and Sirota point the finger at capitalism, not individual—or even just national—dysfunction. They do this, rightly, without ignoring the individual.

This helps explain why many liberal film reviewers in the mainstream press disliked the film. As Nathan Robinson argues in Current Affairs, these critics saw the rich and powerful presented as destructively myopic and assumed the movie was Idiocracy 2.0. But the rich and powerful in the film aren’t so much stupid as shaped by their class position. Moreover, the main protagonists, Randall Mindy and Kate Dibiasky (Leonardo DiCaprio and Jennifer Lawrence), are redeemed by a return to the working class. Dibiasky ends up working retail during the apocalypse—as have millions of “in-real-life workers” over the long pandemic. She is saved, in part, by her friendship with a born-again-dead-end-punk-redneckish kid named Yule (Timothée Chalamet). Mindy, after failing to change things “from the inside” finds some redemption by working with Dr. Clayton “Teddy” Oglethorpe (Rob Morgan), Yule, and Dibiasky in semi-grassroots protest—however quickly sketched and contradictory.

While the narrative cuts against both patriotic Hollywood bombast (as in Independence Day) and end-of-the-world apologetics (as in The Walking Dead), visually and formally the film is still very much structured as a Hollywood spectacle. This is my only real criticism. Although McKay does interrupt the spectacle at times—in what appears to be intentional glitches toward the end of the movie, and in a scene where you can see the masked film crew—more of these interruptions in Hollywood formula could encourage and enable even more criticality in the audience. What makes Don’t Look Up a social-democratic or Popular Front-type film—albeit an excellent one—is less the narrative of the film itself than its conception of the audience. The question isn’t one of whether or not there are soviets on screen. The question is one of imagining soviets in the movie theater.

Tempest Capitalism isn’t coming to save us
Accessibility by WAH
Loading Comments...