Skip to content
How can the climate movement win? Is pacifism the key, or should we all learn how to blow up a pipeline? Authors Andreas Malm and Noam Chomsky place different emphases in their books, but both avoid addressing an obvious weakness of the movement. A Bookwatch by Simo Dorn.

For several years, the climate movement has been searching for the most effective and sustainable protest strategy to answer the question of climate justice in the long term. In this debate, a wide variety of strategies and forms of protest collide, which cannot all be combined and formulated in a universal blueprint.

Blowing up pipeline or pacifism

Socialist and environmental activist Andreas Malm, whom Naomi Klein calls “one of the most original thinkers” on climate and ecology, is frustrated and angry that the climate movement has so far, in his view, fought for little progress. In his book How to Blow up a Pipeline: Learning to Fight in a World on Fire (Verso 2021), he passionately describes from an activist’s perspective how, despite decades of peaceful mass protests for climate protection, politicians, the media and corporations simply carry on as if there were no climate crisis. 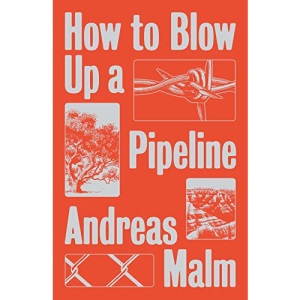 So how can the pressure be increased? In his rousing manifesto, Malm calls for nothing less than escalation: the movement must bring fossil fuel extraction to a halt itself—with our actions, our bodies, with everything at our disposal. It is time, he said, to break what will break us. “The art to be mastered in this is that of controlled political violence.” Nonviolence, Malm argues, provides sympathies that we can no longer afford in the face of impending catastrophe, and that lack a spark of systemic change toward a climate-smart world. Thus, he discusses a wide variety of strategies of sabotage in his book. The examples range from slashing the tires of climate-killing SUVs to blowing up oil pipelines. Malm sharply distances himself from concepts of individual eco-terrorism or an eco-guerrilla, as proposed by anarchists around Deep Green Resistance. These proposals are “fever dreams” and a militant climate struggle must avoid sinking into such shallows.

The book reads engagingly, and Malm engages in a worthwhile debate with the pacifist wing of the climate movement, which declares “nonviolence” to be the consensus of rebellion. Malm convincingly debunks the arguments for strict adherence to a pacifist strategy. As Malm shows, which methods the organized movement uses or adopts must be decided in each situation. In some situations, it may be right or even necessary to go beyond what is legal or what is felt to be reasonable or appropriate today. It is all a question of which means lead to the goal and which are ineffective or cause harm. However, Malm remains one-dimensional in his polemic. He equates militancy and radicalism with violence. In the process, the actual opponent—capitalism—falls out of the crosshairs for him.

The 92-year-old U.S. author Noam Chomsky is more explicit here. Like Malm, he too is not a pacifist. In his book Rebellion or Perdition! – A Call for Global Disobedience to Save Our Civilization  (German language edition, Westend Frankfurt/Main 2021), the linguist argues for the organization of international mass movements that address the system of exploitation of nature and the threat to human existence from below. He advocates a variety of strategies up to and including civil disobedience. But he ties the question of militancy to certain conditions:

It is useless to call for more militancy if the population is not yet ready for it, and this readiness can only be created through patient work. This may be frustrating when we think of the all too real urgency of existential dangers. But whether it is frustrating or not, we cannot skip these preparatory steps.

For Chomsky, the struggles for climate justice and for nuclear disarmament are about the same existential threat. They can be addressed with the same strategies and must be addressed with the same commitment. Both authors are aware of the urgency of the threat posed by the climate crisis. But while Malm calls for violence against the infrastructure of the threat in what seems like a knee-jerk reaction, Chomsky thinks through the situation more broadly, knowing that mass movement from below takes much more time to become actionable and effective. However, Chomsky offers little concrete in the book itself. For example, the success of the anti-nuclear movement in Germany would have been worth a closer look. The same goes for Malm. The fact that in 2011 the German government decided to phase out nuclear energy would have been inconceivable without the decades-long anti-nuclear movement. But the success of this mass movement was not due to the fact that the movement changed its strategy and focused, for example, on attacking the infrastructure of the nuclear industry. The movement did not act according to the motto: Break what breaks you.

Lessons from the anti-nuclear movement

There was always a “militant” wing within the movement—from the Battle of Grohnde at the end of the 1970s to protests against nuclear power plants in the 1980s or against nuclear waste transports in the 1990s, there was always a minority that saw violent actions, from occupying squares to sabotage and attacks on infrastructure, as a legitimate part of political protest. It was of little use: Grohnde and Brokdorf were built and the Castors rolled on— despite militant protests or sabotage actions. The fact that the anti-nuclear movement was able to assert itself and develop strength, in the end, was primarily due to the fact that it repeatedly devised forms of action that made mass participation possible. It defied state repression and violence because it refused to be divided into a “violent” and a “peaceful” part. It practiced civil disobedience and built broad alliances and networks that carried the movement’s cause through several generations. And it won the support of the population because it was able to successfully fight the lies and propaganda of the nuclear industry and its allies in politics and the media—through books, magazines, films, events, and ultimately through constant mobilizations on the streets.

The fact that the anti-nuclear movement was able to assert itself…was primarily due to the fact that it repeatedly devised forms of action that made mass participation possible.

Unlike in the 1980s and 1990s, the trade unions were also finally a visible part of the protest, especially after Fukushima. On March 26, 2011, the protests culminated in the largest nationwide mass demonstration of the anti-nuclear movement with around 250.000 participants. Three months later in June 2011, the Bundestag then passed the nuclear phase-out with fixed dates. It is surprising that neither Malm nor Chomsky refer to this success story.

It is hardly the fault of either author that working-class power is absent from their books. Not only is the working class as a class not very present in their books it is also absent as an organized actor, with some brilliant exceptions, in the climate movement. This describes precisely the challenge facing the movement, and especially the radical left. For no matter how much the rulers and capitalists detest people who smash bank windows, sabotage pipelines, or damage their luxury cars, there is nothing that can hurt them as much as the organized working class. The debate in the movement around the strategies outlined above has been ignited and the arguments put forward need to be explored against each other; not by a small vanguard, but by the entire breadth of the movement.

This article is a translation of a previously published article Welche Strategie für die Klimabewegung? from the German socialist website  marx21.

Simo Dorn is on the editorial team of marx21. He is a theoretical nuclear physicist and an active member of the German left party, Die Linke.

Tempest Which strategy for the climate movement?
Accessibility by WAH
Loading Comments...