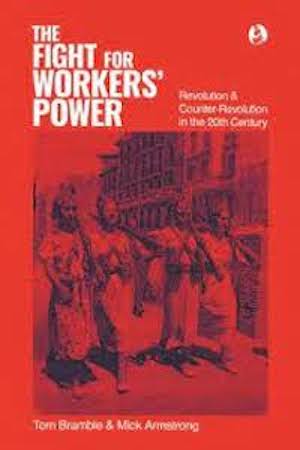 by Mick Armstrong and Tom Bramble

This book offers a fascinating and helpful overview of the key points of class struggle from 1914 to 1956. It examines the collapse of social democracy into nationalism, the Bolshevik Revolution in Russia, the Stalinist Counter-Revolution, and the aftermath of the creation of State Capitalism in Russia.

This is useful history, but even more important, it addresses strategies and tactics for revolutionaries trying to bring about workers’ power.

The revolutionary workers’ movement has gone through tremendous victories and horrific defeats since the time of Karl Marx. For each victory and every defeat leaves its mark on the movement and especially on the revolutionary Left. The movement needs to learn from both if the working class is to finally win its emancipation.

A key strength of this book is that it analyzes, in detail, the activity of revolutionary leftists at the high points of class struggle. It draws conclusions about mistakes that were made and suggests strategies for the future should similar situations arise.

The authors are clear that they come from the Trotskyist tradition. However, they differ from the majority of Trotskyists in seeing Stalinism as the consolidation of a capitalist counter-revolution. This consolidated counter-revolution took political and economic power away from the working class and gave it to a new state capitalist bureaucracy. From that point on, workers were exploited. This view does not see the Stalinist government as any form of a workers’ state.

A major theme of this book is that only revolution can bring about workers’ power. Just as important, workers need their own revolutionary parties to organize a successful revolution.

The authors make this point by analyzing the success of the Bolshevik revolution, including the clarification of ideas and organizing necessary to achieve this. Indeed, the Bolsheviks were one of only a handful of parties that resisted supporting “their own” government in World War I.

After the February Revolution in 1917, the Bolshevik Party was forced to rapidly change tactics as events unfolded—from withdrawing support for the Provisional Government, to restraining a premature uprising in Petrograd in July, to pushing forward again, and to taking advantage of the crisis that would come months later resulting in the October Revolution. All of these actions required vigorous debates within the Bolshevik Party and among the working class more generally. The democratic nature of the party was essential to its success.

Similar debates were carried out within the Communist Party of Germany from 1918 through the early 1930s, unfortunately, the party was too new to have developed a large number of experienced members who could navigate the situation and it failed. This resulted in the rise of Nazism and Hitler taking power in 1933.

Much of the rest of the book examines a set of tragedies, and the authors give an excellent analysis of the degeneration of the Russian Revolution and the rise of Stalinism. The counter-revolution in Russia led to Communist Parties internationally committed to Russian foreign policy, often over the interest of workers and the fight for socialism domestically. Millions of workers who wanted socialist revolution were organized by parties committed to a different goal. This resulted in defeat after defeat for the cause of workers’ power.

The authors give detailed analyses of The British General Strike of 1926, the Popular Front in France, the Spanish Revolution (which critiques both Stalinism and Anarchism), the Congress of Industrial Organizations (CIO) in the U.S., anti-Fascism movements in Italy and Greece, anti-Stalinist revolts in Eastern Europe, and the Chinese Revolutions of 1926 and 1949. There are also several chapters about similar conditions in Australia.

These analyses accomplish two important goals. They make a strong case that workers need their own independent revolutionary movement, which is not beholden to any state. Secondly, by examining the tactics and strategies of Stalinist parties, the authors suggest better practices for actual revolutionary parties. In the course of this, they give the Stalinist parties credit where these parties actually took up struggles against racism and imperialism. The problem was that these were not consistent. The goal of the Communist parties was not workers’ power, so when they arrived at the “correct positions”  it was both somewhat accidental and often temporary.

As we face the global climate crisis, the threat of nuclear war, poverty, racism, gender violence, etc., we need to learn from the history of revolutionary struggle.

Capitalism is sinking further and further into its various crises. There has been a concerted multi-decade attack on workers and the poor under neoliberalism. In spite of its many defeats, revolutionary movements have risen across the world from the Arab Spring in the early 2010s to more recent movements in countries like Algeria, Sudan, Lebanon, Iraq, Iran, Chile, Argentina, Myanmar and Hong Kong.

In the last couple years, workers and the poor have fought back with bravery; self-sacrifice and solidarity are clear in these struggles. The workers have the power to take over the economy and create a social system fit for human beings. However, this alone is not enough, and workers will need both organization and political clarity.

As we face the global climate crisis, the threat of nuclear war, poverty, racism, gender violence, etc., we need to learn from the history of revolutionary struggle.

This book is a tremendous aid in achieving the understanding we need. For those who want to go into more detail, there is a very helpful bibliography at the end of each chapter. Everyone interested in fundamental social change should read and discuss this book!