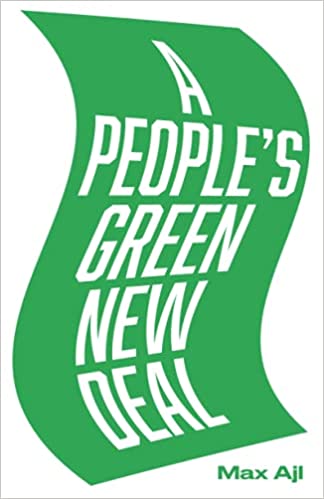 There’s nothing more important today than the politics of climate change. How societies respond to global heating will increasingly shape all political life.

A People’s Green New Deal by Max Ajl, an associated researcher with the Tunisian Observatory for Food Sovereignty and the Environment and a postdoctoral fellow with the Rural Sociology Group at Wageningen University in the Netherlands, gives us some insightful analysis of different political approaches to global heating (a term I prefer since it packs more punch than global warming) and many good ideas about how society should be changed to respond to capitalism’s ecological crisis. However, the book is much less helpful for thinking about the political strategy we need to make these changes.

Although some hard right-wing politicians are still intoxicated by the climate change denial nonsense that organizations funded by fossil capital have been spewing for years, smarter ruling-class strategists are planning for what Ajl calls “Green Social Control.” This “aims to preserve the essence of capitalism while shifting to a greener model in order to sidestep the worse consequences of the climate crisis.”

The European Commission’s announced measures to reduce greenhouse gas emissions in the European Union are an example of this approach. It’s what Joe Biden had in mind when he appointed John Kerry as a Special Presidential Envoy for Climate. It’s also the vision of the Climate Finance Leadership Initiative, a group of finance capitalists headed by former New York City mayor Michael Bloomberg. It’s a vision that Ajl skewers.

Ajl notes “Because there is no capitalism that exists apart from the violent hand of the state, such plans emphasize the national security sector” (it’s no coincidence that in his new role Kerry serves on the National Security Council). It’s very much an imperialist project for which using “the physical land bases of Africa, Asia, and Latin America as carbon farms and for biofuels will allow for CO2 offsets of whatever cannot be decarbonized and may allow for the continuation of a fuel-based modern and hierarchical order, at least for a few of the planet’s people.”

A People’s Green New Deal demolishes ecological modernist thought (ecomodernism). Ecomodernism treats technology as politically neutral and imagines that global capitalist growth can be “decoupled” from greenhouse gas emissions. The book takes on both ecomodernism’s right-wing version—for example, the ideas of the Breakthrough Institute and the EcoModernist Manifesto—and the left-wing variant defended by people such as Aaron Bastani, the author of the book Fully Automated Luxury Communism and (not mentioned by Ajl) Leigh Phillips.

Ajl cuts through the confusion about degrowth—a loose current of ecological thought whose supporters call for less energy and natural resource use in rich countries and reject the growth of Gross Domestic Product as a goal—rightly arguing, “Some sectors, such as agroecological food production, public transport, primary healthcare, and renewable energy, need to grow incredibly fast” in decommodified ways, while “others must disappear: the military, non-renewable energy production, chemical fertilizers.”

He makes a strong case that transitioning to renewable energy generation isn’t enough: in the Global North, energy use also needs to be reduced for the sake of global justice, to allow people in the rest of the world to use more energy while moving away from fossil fuels. When faced with the need to limit global heating as much as possible, and in keeping with the precautionary principle, which calls for taking action to prevent problems even when there is uncertainty about them, we must “put all human energy to work in a just transition, and… move as fast as possible.”

A People’s Green New Deal doesn’t spare the most influential kind of climate justice politics. It poses the question “Green social democracy or eco-socialism?” and looks critically at the version of the Green New Deal (GND) championed by Representative Alexandria Ocasio-Cortez among others, which it accurately characterizes as a program for “domestic anti-racist green Keynesianism,” and at the more left-wing politics of Naomi Klein and the multi-authored book A Planet to Win. Ajl argues that GND reforms won’t be won without mass social struggle, that green social democracy is pro-imperialist (Ajl’s best example is plans to produce millions of electric vehicles in the United States using lithium mined in South America), that the GND legislation drafted by Ocasio-Cortez and others shouldn’t be called ecosocialist, and that we need a movement for ecosocialism, not green social democracy.

The second part of the book lays out the alternative that forms the book’s title, “building eco-socialism.” The book lays out a range of ideas for radical reforms of work, urban life, construction, transportation, manufacturing, and agriculture (discussed at greatest length). It argues emphatically for anti-imperialist internationalism, and that the imperialist countries owe the rest of the world a massive climate and ecological debt that must be paid. It insists that countries of the Global South must have the right to determine their own futures, and that settler colonialism must be dismantled.

A People’s Green New Deal gives us a good ecosocialist critique of important currents of climate politics. Its argument for reducing energy use in imperialist countries as well as transitioning from fossil fuels is valuable. Its anti-imperialist orientation pushes people in the United States  and other advanced capitalist countries to avoid the common mistake of ignoring or not thinking seriously about most of humanity when thinking about climate politics. The book’s insistence that capitalism with green social reforms would still be capitalism, even under “democratic socialist” governments, is important. Its broad vision of alternatives is generally persuasive. All this makes it worth reading.

Yet readers also need to understand that Ajl’s politics are a kind of ecosocialism from above in the Maoist tradition of Samir Amin. It’s right to reject green social democracy, but unfortunately the way the book argues its case can be an obstacle in persuading people who need persuading. European social democratic governments have shown that social democracy is no threat to the most violent imperialist domination of the Global South, but saying there’s “latent fascism even in halcyon social democratic models” smacks of how in the late 1920s and early 1930s Third Period Stalinists dubbed social democracy “social fascism.”

The way the book is argued is also disconnected from the actual existing climate movement in the United States. Instead of thinking in terms of what demands are best-suited for building a mass movement for climate justice in which ecosocialists are a constructive radical wing—an important question socialists should ask when assessing proposals for climate justice reforms—Ajl asks the movement to embrace his ecosocialist politics. His approach to other proposals for a GND is similar to dismissing the demand to end legal restrictions on access to abortion in the United States because that demand isn’t a radical program for reproductive freedom for persons of all genders (it isn’t), or like rejecting the call for the immediate withdrawal of U.S. troops from Vietnam because it wasn’t a call for victory to the National Liberation Front.

This is a sectarian method. In contrast, the politics of socialism from below focuses on how to fight for reforms, not which specific reforms we demand, as what most distinguishes ecosocialism from green social democracy in the here and now.

Ajl doesn’t lay out much of a strategic approach for fighting for what he advocates or a clear conception of socialism. Yet a campist socialism from above—one that treats the conflict between the “imperialist camp” (the United States, Canada, Western Europe, Israel etc.) and the “anti-imperialist camp” (China, Russia, Cuba, Venezuela, Iran, Syria etc.) as the most important political division in the world—is evident in passing comments about “anti-systemic states of Latin America” and elsewhere.1 Consistent with these politics are a flawed theory of imperialism and an exaggerated emphasis on the role of “Communist” states and movements in achieving broad welfare states. (Ajl uses the term social democracy for what I call broad welfare states. I believe social democracy is better reserved for a specific kind of reformist politics.)2

A striking aspect of A People’s Green New Deal is how it says almost nothing about the rising capitalist power of our time—China—which the book describes as a “semi-peripheral” country rather than one locked in inter-imperialist rivalry with a declining United States. Without question, the main enemy is at home, but not acknowledging the role of China and its greenhouse gas emissions—which aren’t limited to those generated by manufacturing goods in China for export to the West—in the global climate politics of our time is a political mistake.

Unfortunately, this book will encourage some supporters of anti-capitalist ecological politics to think they have to choose between left ecomodernism of the kind often published by Jacobin and anti-ecomodernist and campist ecosocialism, which Monthly Review promotes. But there’s also an ecosocialism from below that isn’t ecomodernist and whose anti-imperialism isn’t campist.

When read critically, A People’s Green New Deal is a useful resource for people who want to practice this kind of ecosocialism but readers would also do well to read Ian Angus’s Facing the Anthropocene: Fossil Capitalism and the Crisis of the Earth System as well as articles by Gareth Dale and Simon Pirani.

David Camfield, who lives in Winnipeg, Canada, hosts the socialist podcast Victor’s Children and is a member of the editorial board of Midnight Sun. His newest book, Future on Fire: Capitalism and the Politics of Climate Change, is forthcoming from PM Press in 2022.