Democratic Socialists of America (DSA) chapters are presently electing their delegations to the 2021 National Convention, to be held online August 1-8. In the past, a list of delegate names without affiliations have been released to elected delegates after the conclusion of elections. This ends up being too little, too late. A list of 1300 names close to convention without any information to identify them politically is not useful for the average person. National caucuses, however, tend to have a lot of this information based on their contacts across the organization. This information is very valuable in efforts to understand the political composition of delegates, and then be able to make political calculations or potentially reach out to collaborate.

Below I have collected results of delegate elections—these do not contain any identifying names, but are organized primarily by city and local slates, with secondary information showing which national caucus led or organized the slate. At the time of this writing, approximately 500 of the 1300 delegates are accounted for—the linked table is live so it will be updated as new races come in. DSA members from around the country sent me election results, slate, and caucus information (sources provided below).

DSA has a localistic streak, so you will notice that most of these are local slates with their own names—they may not mean anything to you if you are not from that chapter. New York City has the largest number of delegates (130 or 10 percent of all convention delegates), followed by Los Angeles (77 or 6 percent), and then Chicago (49 or 4 percent), and Metro DC (45 or 3 percent). As a sample of all delegates, at the time of this writing it will be skewed towards larger chapters, which tend to have a more hardened caucus-faction system that is tied to national politics.

The races in Chicago and Los Angeles are particularly interesting, where local slates have formed in opposition to the direction of chapter leadership. In Chicago, the Bread and Roses (B&R) caucus has run the chapter for years. The Sprout slate formed after debates in the chapter about mutual aid, leadership transparency, and the politics of the George Floyd protests. There is also Slate and Revolution, active Chicago chapter members who distinguish themselves as revolutionary socialists. The results indicate a shift in the chapter: Sprout elected all 13 of its delegate candidates (nine in the first round); B&R likewise won all 13 (three in the first round); Slate and Revolution elected six of their seven delegate candidates (three in the first round); and the Class Unity caucus elected 4 delegates (one in the first round, though by far the most votes of any candidate). 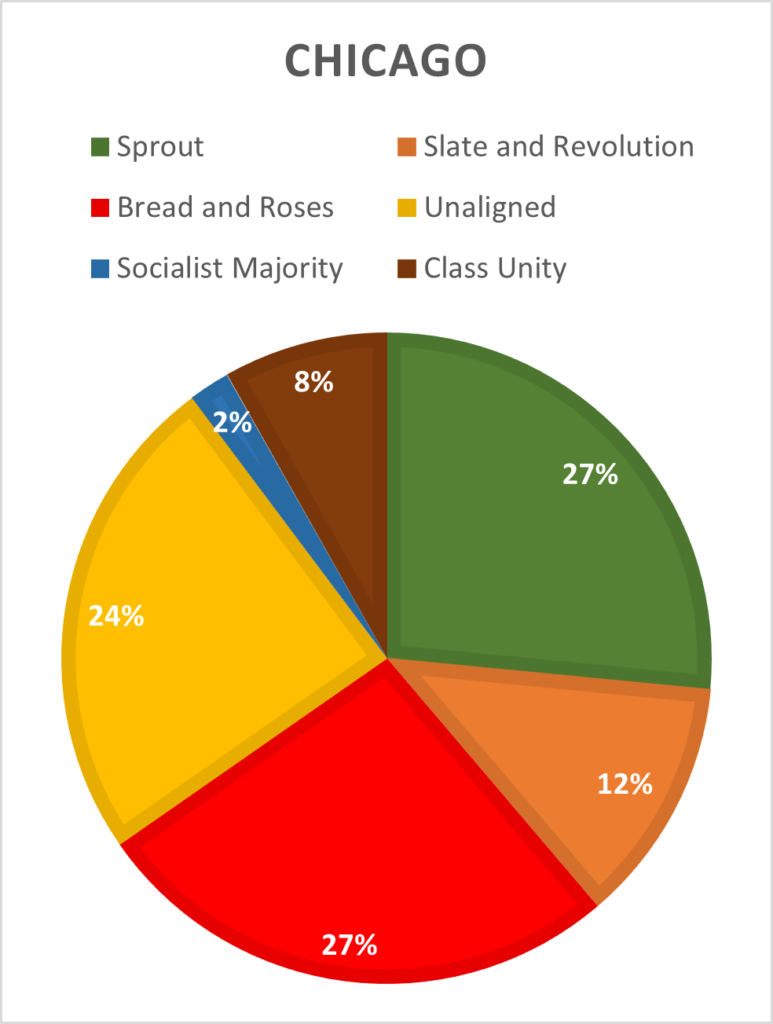 Likewise there is a battle in the LA chapter. Collective Power Network (CPN) has been the chapter leadership for a couple of years. A local opposition slate, Intersectional Socialists for Black Liberation (ISBL), formed comprising just about every political tendency that disapproved of the leadership: Libertarian Socialists, Socialist Majority, Socialists for Black Lives (a local formation), and others. The LA results show the CPN-led slate, 21st Century Socialism, leading with 30 delegates (39 percent), then ISBL with 24 delegates (31 percent), then the B&R-led slate, Mass Action, with 13 delegates (17 percent). 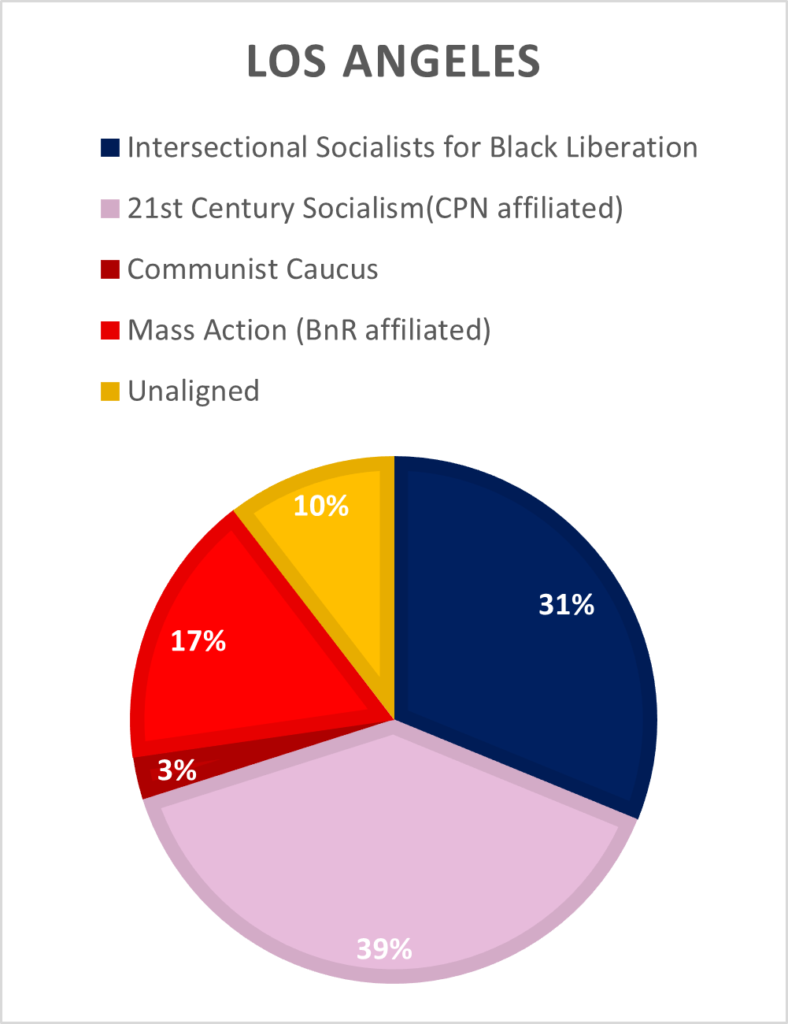 Both Chicago and LA have a relatively small proportion of candidates not attached to any slate or caucus, Chicago: 12 delegates (25 percent); LA: 8 delegates (10 percent).

If we compile all the results, we start to see the national standings from the samples. Regardless of whether someone is formally a member of a national caucus, if they ran on a slate led by a national formation we can assume that they will vote with the sponsoring caucus. For example, someone listed on the B&R-led Mass Action slate in LA will likely vote with B&R and so it makes sense to list them as part of the total B&R count. If a slate is genuinely multi-tendency with conflicting political opinions, like ISBL, it does not make sense to attribute them to any single formation unless individual members have self-identified.

What we see is that a plurality of delegates are formally uncommitted—they neither ran as part of a slate nor are members of a caucus. B&R has the largest share of delegates, followed by CPN, though CPN has since split. The next largest grouping is actually local slates that are not attached to any formation: Mosaic in Atlanta, Sprout and Slate and Revolution in Chicago, Cherry Blossom and ACT in Metro DC. After that, we see a political fracturing: lots of small groupings that have formed more recently: Emerge in New York City, Red Caucus in Portland, Communist Caucus, Reform and Revolution, Tempest, Class Unity, and others. Some local communist formations have a joint publication, Partisan, which suggests national coordination and political affinity. 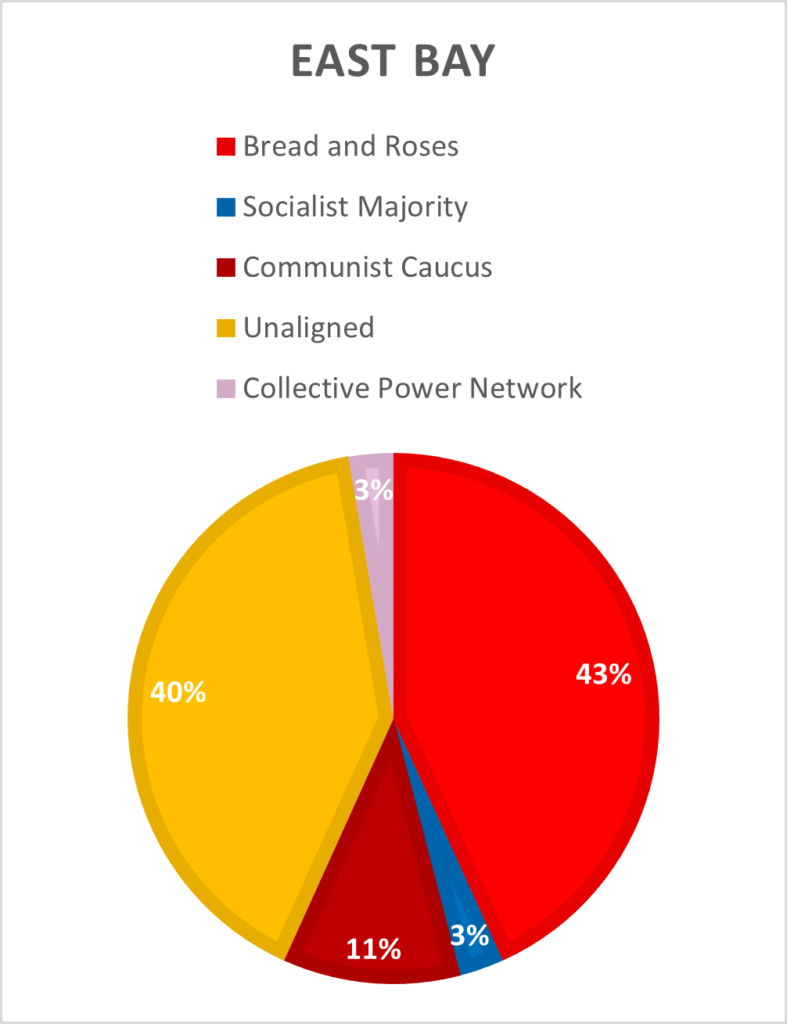 There are two significant shifts from last convention. Socialist Majority (SMC) was one of the largest organized forces in 2019, their delegate share has seemingly plummeted. In 2019, SMC had 28 candidates committed in New York City—in 2021 they have 15. Likewise in LA, the SMC delegate share has dropped from 17 to 5. Reporting for other SMC bastions (Twin Cities; Denver; St. Louis) have not come in yet, but presumably they will follow the pattern. Some of this seems to have been lost to CPN, as appears to be the case in LA and Atlanta. In New York, it seems those voters are now unaligned. 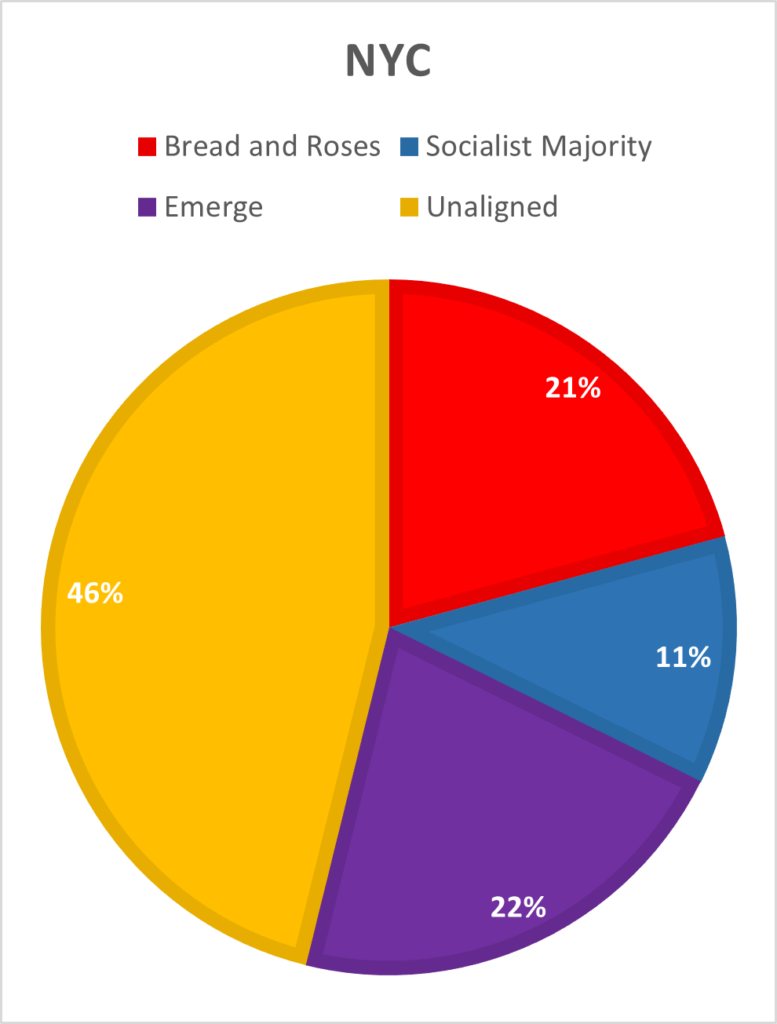 The other major shift is what appears to be the exit of the DSA far left. In 2019, Libertarian Socialists (LSC) had 10 percent of delegates, and Build another 14 percent. (The political leanings of Build were all over the place, but it included many communists, Leninists, anarchists, and others who consider themselves left of center.) Build collapsed after last convention—some of their members went on to join local communist formations, but many appear to have divested from DSA. Likewise, LSC has all but disappeared. From the information available, LSC has not run any of their own slates. In cities where they once had major presence (D.C., Pittsburgh, Buffalo, Portland) they appear not to have claimed any delegates. (Many West Coast chapters have not reported yet, which historically contribute to the LSC share.)

There seem to be two significant factors here. The first is the resignation of the political representatives of these tendencies from the National Political Committee (NPC) last year: Tawny, Sauce, and Erika. The appointed replacements were not from similar political currents, depriving this grouping of representatives on the NPC. The second is the absence of convention proposals. LSC and Build submitted a plurality of bylaw changes in 2019, in 2021 they have submitted none. Likewise, the two LSC resolutions are directed at internal organizational efforts rather than explicitly political questions. This contributes to a drop in convention proposals overall, and the crash in the proportion of resolutions per member. 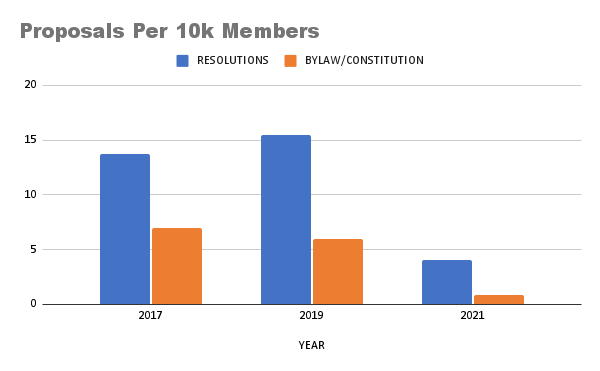 The delegate counts tell us about what is happening in DSA but it might end up being academic if there are no choices in what to vote for. There is only one proposal on labor; only eight bylaw changes (the limit to make it to the floor is ten, so in theory all of these will be debated by default); and very few candidates for NPC.

If you have results you’d like to report, you can send a message to @andsern on twitter.

Andrew Sernatinger is a labor activist and member of DSA in Madison, Wisconsin. He is a member of the Tempest Collective and has written for New Politics, International Viewpoint, Jacobin, and In These Times .