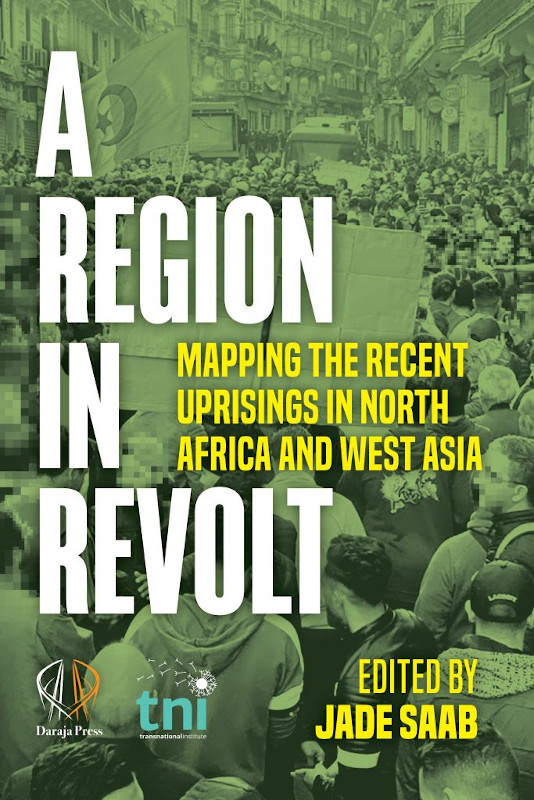 Sam Salour summarizes A Region in Revolt: Mapping the Recent Uprisings in North Africa and West Asia edited by Jade Saab, a collection of essays that provides a comprehensive review of the 2018-2019 wave of struggle in the region. In the third part of this multi-part series, Salour provides an introduction to the book and then outlines the essay “The Revolutionizing Nature of the Lebanese Uprising” by Jade Saab and Joey Ayoub.

The movements in Algeria, Iraq, Lebanon, and Iran have been characterized by oppositional protests and the rejection of ruling elites, but have not been able to unite behind a set of positive demands. While the lack of leadership has prevented the co-optation of the movements by existing political parties, it has also hampered their further development. In 2019, Lebanon saw an October revolution that was sparked by a bill that would tax Voice Over Internet Protocol apps such as WhatsApp but quickly morphed into a country-wide condemnation of the sectarian political system and its failure to provide for people’s basic needs. The uprising was notable for its ability to overcome social divisions in a country that allocates government positions on a confessional basis. In this context, the protesters’ call for the resignation of all members of the government—chanting kellon yani kellon (all of them means all of them)—represented a rejection of sectarianism.

Most of the essays in this collection are written by members of the Alliance of Middle Eastern and North African Socialists. The Alliance originally started in March 2016 as a grouping of Syrian and Iranian Socialists with a trilingual website (English/Arabic/Persian) to help express the aspirations of “the Other Middle East” and to offer analyses of critical issues, host new conversations, and build bonds of solidarity between Syrians and Iranians opposed to their respective authoritarian regimes. Since then, the Alliance has grown to include members in all the countries covered in this collection (and others) while continuing its mission to provide and amplify socialist perspectives from the region.

Jade Saab and Joey Ayoub argue that the 2019 Lebanese uprising must be understood as a reaction to 15 years of civil war (1975-90) and the nearly three decades that followed during which Lebanese people had very little control over the affairs of their own country. Although the Taif Agreement put an end to the civil war, it failed to end sectarian conflicts and the confessional system. As a consequence, the civil war parties—each a vessel for the confessional group they represent—along with their oligarchic allies, consolidated their grip on power. The state serves as a tool in the hands of this “transnational warlord-oligarch class” to enrich itself through corruption and embezzlement and to do business with the Gulf, Iranian and Western elites while leaving public infrastructure to rot. They maintain their control through clientelist networks and by playing the population off against each other as threats to peace.

The 2019 uprising was a culmination of years of resistance beginning with the YouStink movement in 2015. In response to a garbage crisis, where piles of rubbish accumulated in the streets of Beirut and Mount Lebanon, thousands of protesters joined the demonstrations in the streets and organized sit-ins at government buildings. Although the YouStink movement could not sustain itself, it gave rise to a new line of political involvement and new movements and political parties arose in the 2016 municipal elections and the 2018 national election to challenge the existing ones. Despite their differences, these movements, parties, and NGOs known as the Civil Movement were united in their opposition to the corrupt ruling class that was destroying their country.

The coming together of the “old guard” political parties to defeat the burgeoning Civil Movement proved the systemic nature of corruption and the need to overthrow the entire political establishment. The years since the garbage crisis have been marked by social unrest; there were 324 collective actions in 2015, 468 in 2016, 419 in 2017, 188 in 2018, and 200 in 2019 prior to the uprising. With the flight of Gulf capital and the civil war in Syria, the economic conditions have been deteriorating. Corruption and the growing national debt (Lebanon is ranked third in the world with regards to its debt-to-GDP ratio) have resulted in several bank runs, fuel shortages, and strikes.

People took the streets in all major coastal cities, chanting in support of one another across regional and sectarian lines… Protesters occupied major public spaces, enforced a de facto general strike by blocking major roads, and demanded the resignation of the government.

The trigger to the uprising was the austerity budget passed in July 2019, cutting pensions and public services in the hope of unlocking billions of dollars in international loans. This situation was exacerbated by the fact that Lebanon was running out of cash reserves, leading to a black market in USD and fears of the collapse of the currency. Protests began on the night of October 17 after the government announced a bill that would tax Voice Over Internet Protocol apps such as WhatsApp. People took the streets in all major coastal cities, chanting in support of one another across regional and sectarian lines. By the next day, parts of downtown Beirut were burning and roadblocks made with burning tires had shut down large parts of the country. Prime Minister Saad Hariri gave a 72-hour deadline for political parties to respond to the situation, which inadvertently helped the growth of the movement. Protesters occupied major public spaces, enforced a de facto general strike by blocking major roads, and demanded the resignation of the government.

On October 29, while Hezbollah supporters were attacking the protesters in the streets, the prime minister resigned. As some protesters withdrew from the streets, security forces rushed in to ensure the roads remained open, ending the de facto general strike. In the absence of a strong labor movement to enforce an actual general strike, protesters turned to sit-ins, shaming politicians in public spaces, and demonstrations in front of government buildings. By November, as banks started enacting capital controls and limiting withdrawals, protesters began organizing sit-ins at the banks, occupying them until customers could withdraw money. Protests continued over the weekend. However, in the face of repression and the government’s disregard for their demands, protesters slowly gave up on legal and electoral means and turned more and more to explicit class-based rhetoric.

As the protests became more confrontational, the media increased its denunciation of the protests and barricades were erected to protect banks and all symbols of power. On December 19, the government chose Hassan Diab to be the next prime minister. Protesters immediately called for a “week of anger” and thousands joined the demonstrations, attacking the banks and setting fire to ATMs. The protests were brutally suppressed, and the new government was formed on January 21, 2020. The arrival of the COVID-19 pandemic was a convenient cover for the government to implement a state of emergency and deploy the army to enforce lock downs. None of these measures, however, have been able to stop the protests. The deteriorating economic conditions and the continuation of protests—even if not as intense as before—under a global pandemic and military lock down, suggests that the revolution in Lebanon is by no means over and will re-emerge once the lockdown is lifted.

“[P]rotesters in Lebanon have understood that their enemy is not just domestic, corrupt political parties and regional imperialist countries such as Syria and Iran, but neoliberal capitalism in general.”

The uprising has faced a similar contradiction to that of Iraq. On the one hand, fearing either the cooptation or arrest of the leaders, protesters have rejected any form of leadership. On the other hand, in the absence of any leadership, they have not been able to cohere the movement around a set of positive demands and an alternative vision. Although new modes of organization such as alternative unions and revolution tents have emerged, Saab and Ayoub believe that the lack of leadership has prevented them from fusing into more comprehensive structures of resistance, such as revolutionary councils organized on a democratic basis and amenable to popular demands. Considering the deeply rooted sectarian divides of the Lebanese society, this is to be expected of a young and growing movement. However, if the protesters do not put forward an inclusive revolutionary alternative, the movement could dissolve into electoral politics.

Last but not least, the struggle in Lebanon will have to face the IMF and the chains of debt that subordinate the country to international capital and its embodied institutions. In the course of struggle, protesters in Lebanon have understood that their enemy is not just domestic, corrupt political parties and regional imperialist countries such as Syria and Iran, but neoliberal capitalism in general. This fight can only succeed if the revolution finds allies in the region and across the world to form bonds of solidarity in their common struggle against the domination of capital.