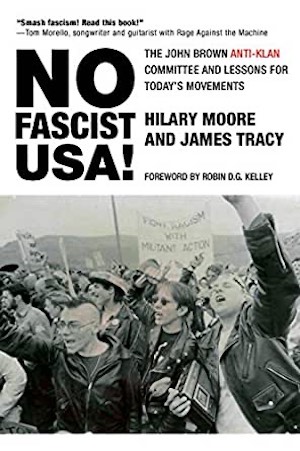 No Fascist USA!
The John Brown Anti-Klan Committee and Lessons for Today’s Movement

by Hilary Moore and James Tracy

Any history of the resurgent far right in the U.S. must include the period of the 1970s and 1980s. Among the lessons we learned from the Trump administration is that a combination of right-wing rhetoric from the White House and organized forces of reactionary street thuggery is a lethal formula for incipient fascist movements. In No Fascist USA! The John Brown Anti-Klan Committee and Lessons for Today’s Movements, Hilary Moore and James Tracy show us past as prologue, taking us back to the period between 1974 and the end of the Reagan presidency. This period was marked by the rise of a revitalized Ku Klux Klan, the growth of white militia movements, the election of a racist demagogue, and the beginnings of a far-right electoral strategy. It produced grotesque figures like Louisiana state representative David Duke, a former Klan member. Moore and Tracy’s book also provides a compelling backstory of an important challenger to these trends: the John Brown Anti-Klan Committee, a precursor of today’s anti-fascist mobilizings. Their book shows not just how the current far right built some of its momentum, but how fragmentation of the U.S. Left after the 1960s created renegade, atomized anti-fascist movements that struggle to find national unity today.

The John Brown Anti-Klan Committee launched in New York City around 1977. It was a coalition of activists and organizers who had begun their work exposing Ku Klux Klan members among the staff at the Napanoch prison in upstate New York. A leading Anti-Klan Committee organizer, Lisa Roth, had worked in the Student Nonviolent Coordinating Committee during high school and later in Students for a Democratic Society (SDS). She helped form the group Friends of Assata and Sundiata, named for Black revolutionaries Assata Shakur and Sundiata Acoli, members of the Black Liberation Army. According to Anti-Klan Committee member Laura Whitehorn, “Our main strategy was to bring white people into contact with the Black revolution and allow them to be changed by it.” The choice of 19th century white radical abolitionist John Brown as namesake for the new group, according to Moore and Tracy, “signaled that the era’s liberal white agenda fell far short of the work … needed to be done to abolish white supremacy.”

The Anti-Klan Committee practiced what is now called “doxing” to expose Earl Schoonmaker, head of the Naponoch chapter of New York State Correctional Officers & Benevolent Association, as a Grand Dragon of the New York Klan. It publicized the demands of Napanoch prisoners, primarily Black and Latino, to remove Klansmen from their jobs. The first Anti-Klan Committee pamphlet, Smash the Klan!, featured a picture of Schoonmaker, unhooded, posing with his wife and other Klan members.

The choice of Shakur and prisons as a focal point of anti-Klan work was a deliberate response to the successful campaigns by the FBI and COINTELPRO to infiltrate, and incarcerate, revolutionary groups and their members. Meanwhile, in Austin, Texas, the Anti-Klan Committee formed a second front, working in alliance with the Brown Berets, a Latinx group. They pressured the Texas state legislature to investigate so-called survival camps. Young boys in the Explorer Scouts and Civil Air Patrol cadets were trained at camps at the Mexican border to spot “illegal aliens” and “taught by Klansmen to kill with rifles, knives, and wire thongs.” These far-right activities, supposedly in preparation for a coming race war, were a foreshadowing of the later border patrol group the Minutemen. The Austin Anti-Klan Committee also worked with the Republic of New Afrika, a Black nationalist organization, and the May 19th Communist Organization. 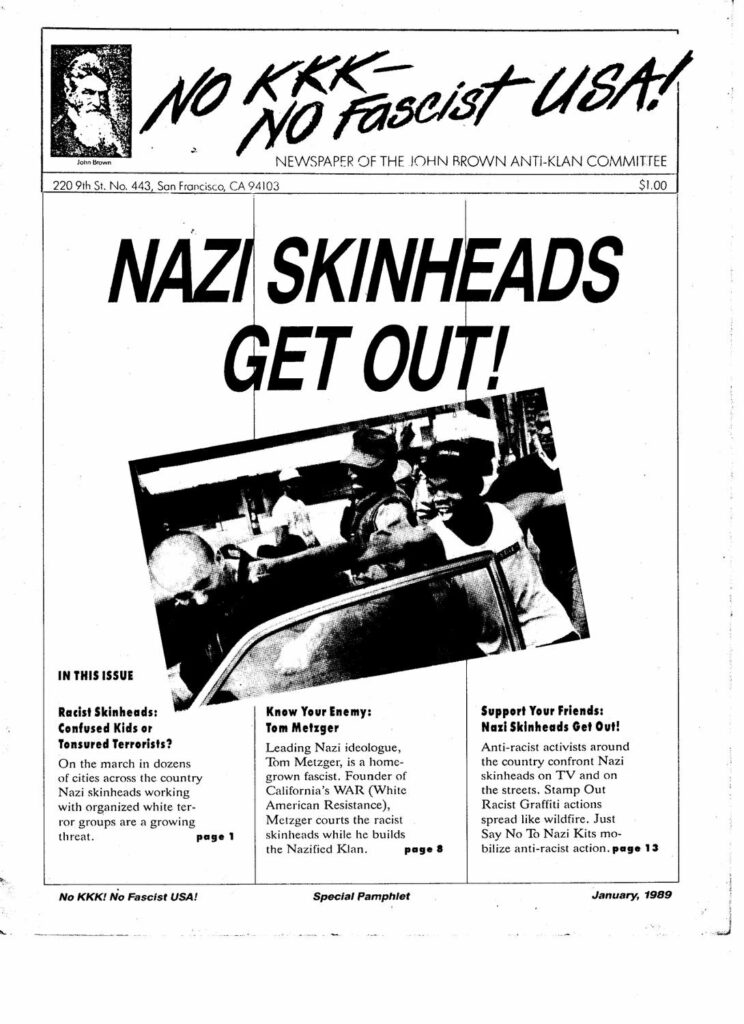 The 1970s climax in the ground war between anti-racists and the far right was undoubtedly November 3, 1979 when 35 armed members of United Racist Front an umbrella organization of the KKK and American Nazi Party, drove to an anti-Klan demonstration in support of Black textile workers in Greensboro, North Carolina and shot more than 28 rounds of ammunition at protesters, killing five and wounding ten more. Four of the dead were members of the Communist Workers’ Party, which had organized the event. The FBI and Bureau of Alcohol, Tobacco, and Firearms were aware of the plan to attack the rally. Police had an informant inside the Klan. It is sometimes forgotten that the rally and massacre took place one day after the Black Liberation Army broke Assata Shakur out of prison; New York Anti-Klan Committee members put up posters to cover up FBI wanted signs saying “Assata Shakur is Welcome Here.” The Committee’s newspaper, Death to the Klan!, was first released in the same month as Shakur’s breakout, featuring the headline “Assata Shakur Escapes!”

Provisional intermingling of Black liberation politics, anti-Klan work, and prisoner solidarity work in the 1970s set the stage for encounters after 1980 with Ronald Reagan and the rise of a broader, more invigorated far right. The Ku Klux Klan officially endorsed Reagan for President. Reagan’s coded racist rhetoric in support of “states’ rights,” his attacks on “welfare queens,” and his overt appeals to white voters helped galvanize grassroots white nationalists. In California, Tom Metzgar, founder of the White Aryan Resistance, won the nomination for Congress in the 43rd District. Metzgar had been in alliance with David Duke, National Director of the Knights of the Ku Klux Klan, who was elected to the Louisiana House of Representatives in 1989.

The Klan perceived the rise of Reagan as its “Third” period of historical growth.  Between 1974 and 1981 membership grew from 1,500 to about 10,000.  During the Reagan presidency John Brown Anti-Klan Committee members organized against Metzgar in San Diego, against the Sunland Klan in Los Angeles County who marched to honor a white cop for killing a Black man, and against Klan rallies in Texas where Klansmen were targeting Vietnamese fisherman. The Anti-Klan Committee had an ecumenical approach to fighting the far right, a good example was its inauguration day rally against white supremacy in 1981. The rally featured Camille Bell, mother of Yusef Bell, one of the children killed in the Atlanta child-killing spree; Ahmed Obafemi, from the Provisional Government of the Republic of New Afrika; and Said Hamad of the Palestinian Liberation Organization.

In a chapter titled “Confrontation and Culture Wars,” Moore and Tracy show how the Anti-Klan Committee promoted Rock Against Reagan, a derivative of the 1970s Rock Against Racism campaigns in the U.K. The Anti-Klan Committee supported national concerts where bands like Bad Brains, Really Red and the Dead Kennedys performed.  The Austin-based band the Dicks penned soundtrack songs for the movement like “Anti-Klan” and “Dicks Hate the Police.” The band M.D.C. gave the movement a refrain used in the book title: “No war, no KKK, no fascist U.S.A.” Chicago chapters worked on campaigns to “Stamp Out Racist Graffitti,” especially in the Uptown area, where white anti-racist groups like the Young Patriots Organization had already put down a foothold. 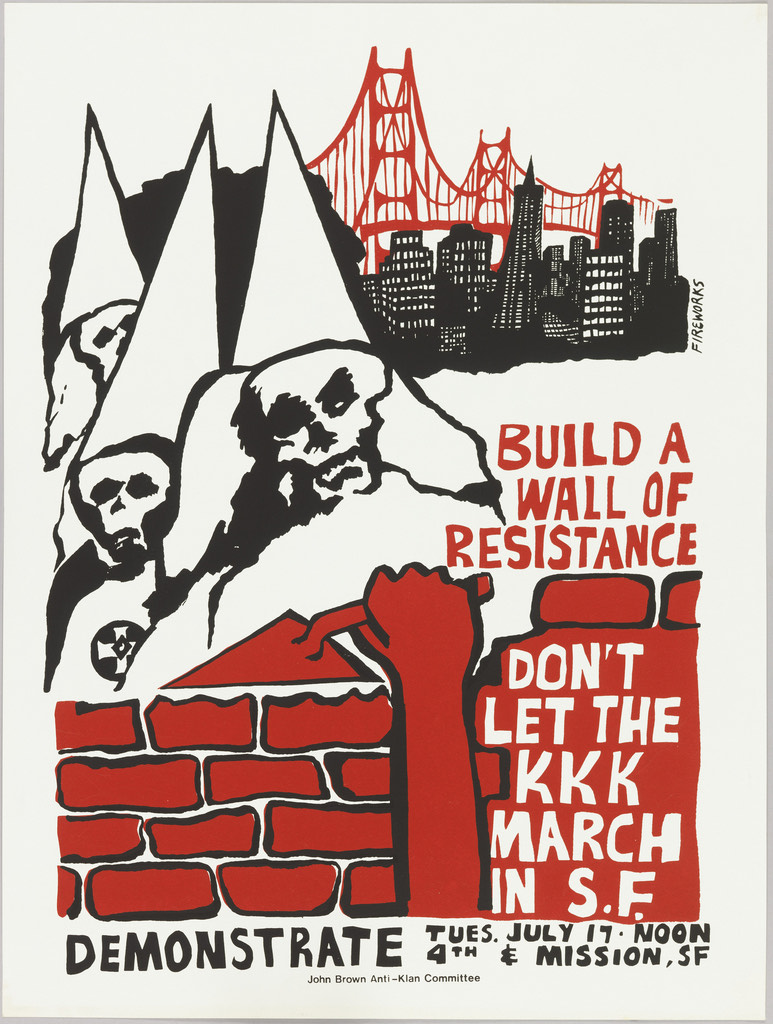 By the early 1990s, John Brown Anti-Klan Committee membership waned as members grew older and moved into other arenas of political work.  Moore and Tracy point out that some members took their direct action organizing tactics into areas like prison abolition work and ACT UP. The authors are also judicious in assessing the strengths and weaknesses of the John Brown Anti-Klan Committee. The movement was important for recognizing the normalization and mainstreaming of white power and white supremacist politics, and was ahead of its time in protesting the rise of patriot and militia groups that are familiar to us now as a legacy of that period. Their work against police surveillance, racist policing, and mass incarceration also seems especially prescient in our age of the New Jim Crow and Black Lives Matter. Finally, the efforts by the John Brown Committee to support Black and Brown self-determination movements showed a spirit of radical intersectional organizing. On the other side of the ledger, the movement was voluntarist and often sectarian. It was infused with white privilege theories carried over from groups like SDS which prevented it from recognizing the centrality of antisemitism in the reformation of the Right in the 1970s and 1980s. The Anti-Klan Committee also lacked a strong class analysis of fascism which obscured an understanding of its historic role in smashing working-class organizations. These tendencies prevented the movement from producing a wider united front.

More than anything, the John Brown Anti-Klan Committee should be remembered and celebrated for anticipating the normalization and recoding of white supremacy that was central to the growth and mainstreaming of the far right today. Election of a David Duke, proliferation of armed self-organizing by border patrol and vigilante groups, presidential use of “dog whistle” politics to mobilize racists, and police acting as armed bodies of a capitalist state with all kinds of time for white supremacy: these images of the past have flashed up before us again both before, during, and after the January 6, 2020 Capitol riots.

Comrades across the Left would do well to read and discuss Moore and Tracy’s book. There have been several successful anti-fascist organizing campaigns in recent years. For example there was a 5,000 person anti-fascist march in Washington D.C. on the one year anniversary of Charlottesville, and a massive 2017 protest against the far right in Boston. However, the wider Left, including the Democratic Socialists of America with its 90,000 person membership, has not found its theoretical or tactical footing in response to the new far right. No Fascist USA! offers important historical lessons and strategic cautions for what we might do in the face of a roiling, resurgent far right that shows no signs of going away.