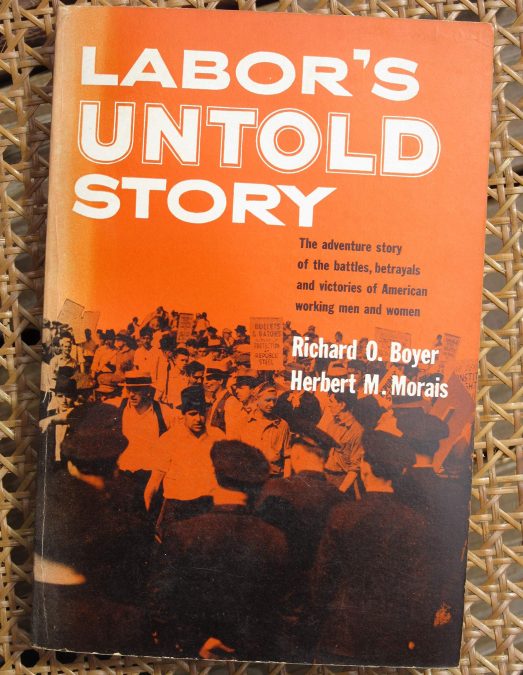 Labor’s Untold Story by Richard O. Boyer and Herbert M. Morais is one of the classic books of United States labor and Left history. It was published by the United Electrical, Radio, and Machine Workers of America (UE) in 1955 when Cold War repression still raged. Boyer and Morais sought to salvage the bloody history of class struggle and the heroic role of radicals from the anti-Communist wrecking ball of the era. It pitched itself as “The adventure story of the battles, betrayals, and victories of American working men and women.”

It was not surprising that the UE published Labor’s Untold Story (LUS). The UE was one of the eleven “Communist-dominated” unions, to use the language of that era, that was expelled from the Congress of Industrial Organizations (CIO) in 1949-1950. The once militant mass movement of industrial workers of the late 1930s and 1940s, the CIO, was tamed by Cold War repression. The UE was one of the largest CIO-affiliated unions. Members and supporters of the besieged Communist Party, USA (CP) bore the brunt of this repression, including many leaders of the UE throughout the country.

I read LUS when I was a young socialist in the late 1970s along with The Labor Wars by Sidney Lens. I was not alone. LUS was certainly a favorite textbook for many young radicalizing students and workers throughout those years. Both books, however, were difficult to find back then except in left-wing or used book stores. So, when I read in Jacobin and The Intercept that LUS was getting a fresh hearing, I was heartened by the renewed interest in labor history, but I also cringed because of its paleo-Stalinist politics. After all Boyer and Morais wrote LUS from the perspective as loyal members of a highly Stalinized Communist Party.

Do not get me wrong, there are many strengths to LUS. Boyer was a gifted writer who wrote for a variety of news outlets during his lifetime, including the New Yorker. The first two-thirds of the book are exciting reading. I credit Boyer with making this history leap off the page. It lives up to its billing as an “adventure story” replete with massive battles between labor and capital from the end of the Civil War to World War I. All our heroes are there: the Haymarket Martyrs, the Industrial Workers of the World, Eugene Debs, Elizabeth Gurley Flynn, and many more.

Unfortunately, the last third of the book takes a turn for the worse. It devolves into a polemic in defense of CP politics from the late 1920s onward, including writing out of history Trotskyists and other radicals that led many of the most important strikes of the era. Here a few examples:

Besides the censoring of important labor battles in LUS, the servile deference to FDR and the New Deal is hard to take. You would not know from reading Boyer and Morais that FDR interned the Japanese during World War II, prosecuted socialists, signed anti-labor bills, and fought a “war for democracy” with a segregated army.

Boyer to his credit left the CP soon after Khrushchev’s revelations of Stalin’s crimes in 1956. Morais’ political history is briefly discussed in this New York Times obituary. Whether either of the authors had second thoughts about the history they wrote, we may never know. Yet, we should know better. In the decades following the 1955 publication of LUS, hundreds of new labor and left histories have been written, providing a wider lens that has enriched our understanding of working class history and the Left. That the UE has decided to republish Labor’s Untold Story without a new introduction that rejects the worst legacies of its Stalinist past is doing a disservice to educating a new generation of socialists in the United States.

Joe Allen is a long-time labor activist and writer. His latest book is The Package King: A Rank and File History of UPS.