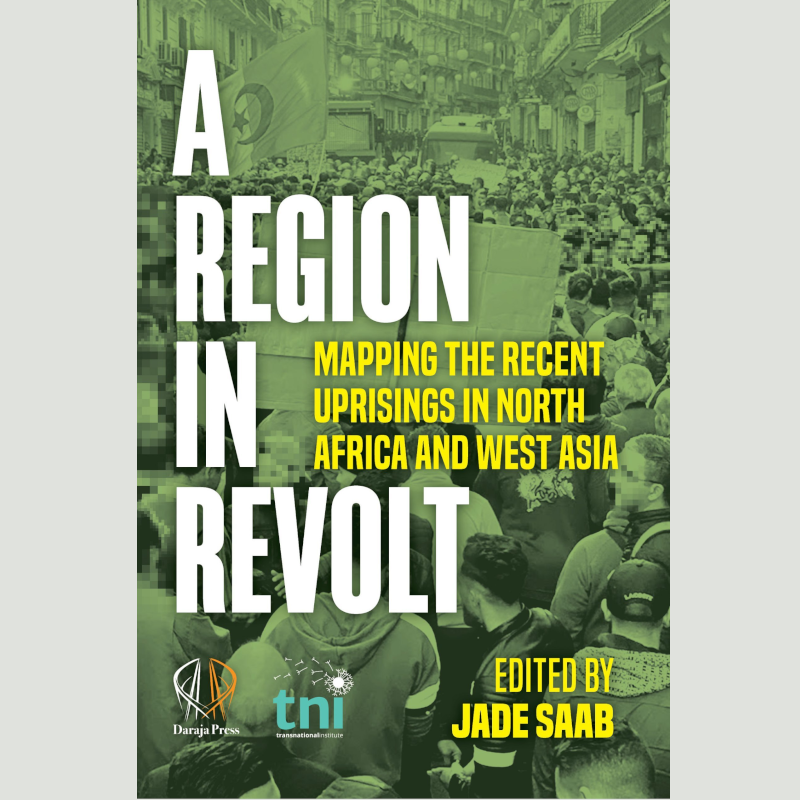 Over the past couple of years, a wave of revolutionary uprisings has swept over the region commonly referred to as the Middle East and North Africa. Protesters in Sudan, Algeria, Iraq, Lebanon, and Iran have taken to the streets to demand the overthrow of their respective authoritarian regimes. While recognizing the common characteristics of these protests, the essays collected in the book A Region in Revolt: Mapping the Recent Uprisings in North Africa and West Asia emphasize the specific historical, political, and economic context of each country, highlighting the key actors involved, their goals, their weaknesses, and their possibilities.

The economies of the region—in the absence of a developed manufacturing sector—rely on oil and gas exports. The wealth extracted from natural resources is distributed amongst the corrupt elites, wasted on the military and imperialist adventures, provides a market for industrialized nations, and fuels speculative adventures in real estate and banking. The consequence for the vast majority of the population, shut out of these spoils, has been unemployment, marginalization, and poverty. In a climate of corruption, these economic realities along with political repression, oppression of women, and discrimination against oppressed minorities created pre-revolutionary conditions in the region as a whole. Although all of these movements are revolutionary in their aspirations—demanding systemic change—it remains to be seen whether any of them can achieve revolutionary outcomes.

Although all of these movements are revolutionary in their aspirations—demanding systemic change—it remains to be seen whether any of them can achieve revolutionary outcomes.

The movements in Algeria, Iraq, Lebanon, and Iran have been characterized by defensive demands—the rejection of ruling elites—but have not been able to unite behind a set of offensive demands. While the lack of leadership has prevented the co-option of the movements by existing political parties, it has also hampered their further development. The only exception is Sudan where the Forces of Freedom and Change (FFC) alliance has given coherence, even if not a perfect one, to the elemental forces from below. Pushed by grassroots organizations such as the neighborhood based Resistance and Change Committees, the FFC forced the military into a shared transitional government akin to a dual power situation.

The authors of the collection emphasize the importance of regional and international solidarity against the powers of international finance. The struggle against imperialism and global capital does not imply defending reactionary regimes such as the Islamic Republic of Iran as the lesser evil, nor does it require a revolutionary vision that goes beyond overthrowing national authoritarian regimes. Although the different uprisings have shown awareness of the global nature of their struggle and the need for regional solidarity, concrete collaboration is yet to come. It is the role of the global Left to help create the space for such collaborations.

Most of the essays in this collection are written by members of the Alliance of Middle Eastern and North African Socialists. The Alliance originally started in March 2016 as an alliance of Syrian and Iranian Socialists with a trilingual website (English/Arabic/Persian) to help express the aspirations of ‘the Other Middle East’ and to offer analyses of critical issues and new dialogues and bonds of solidarity between Syrians and Iranians opposed to their authoritarian regimes. Since then, the Alliance has grown to include members in all the countries covered in this collection and more while continuing its mission to provide and amplify socialist perspectives from the region.

Activist-scholars Azza Mustafa and Sara Abbas explain that the Sudanese uprising must be understood within the context of the historical dynamics of Sudan’s politics since its independence from Britain in 1956: “military rule by force brought to an end by non-violent popular uprisings, resulting in elected civilian governments that are, in turn, brought to an end only a few years later by another military coup.”

The third and last civilian government, headed by al-Mahdi, lasted only 4 years from 1985 to 1989 when it was overthrown by Omar al-Bashir’s military coup. Al-Bashir established a ruthless Islamist-military regime that became known as Inqaz (Salvation) and lasted until his removal on April 11, 2019. Features of past military regimes such as restriction of freedoms, extractive relationship with resource-rich regions, and violent treatment of those deemed inferior—southerners, ethnic and religious minorities, and particularly women—reached unprecedented levels and manifested in the Darfur genocide that claimed hundreds of thousands of lives.

In 2011, the Inqaz regime entered into a protracted period of crisis after South Sudan’s independence, losing 75% of its oil revenues derived from southern fields. As the crisis deepened, corruption soared, resources were sold to the highest bidder, the cost of living began to spiral out of control. In order to compensate for lost revenue, the regime implemented draconian austerity measures resulting in high rates of unemployment. In response, in January 2013, opposition groups signed the ‘New Deal Charter’ affirming the multi-ethnic and multi-religious nature of the country and their aim of building a democratic state based on equal citizenship, peace, and human rights. Protests grew widespread in September 2013 but were brutally suppressed by the security forces who killed 175 people in a matter of days. This was, however, only a short term victory for the regime. The 2013 protests became fertile terrain for the growth of a spirit of confrontation and resistance that culminated in the December 2018 revolution.

The 2013 protests became fertile terrain for the growth of a spirit of confrontation and resistance that culminated in the December 2018 revolution.

The 2018 demonstrations initially began in protest to skyrocketing prices but soon escalated to demand the overthrow of the Inqaz regime. The banned Sudanese Professional Association (SPA)—an association of several different trade unions formed in 2012—took the lead in announcing protest schedules on its Facebook page and uniting different opposition forces into the Forces of Freedom and Change (FFC) to demand the formation of a representative transitional government.

In early April, protesters began a massive sit-in at the army headquarters in Khartoum. The sit-ins spread to other cities and towns, bringing millions of people into motion. The regime responded with violence, killing dozens of peaceful protesters. Reports emerged of several lower ranking officers and rank-and-file soldiers refusing their orders. Many of these soldiers come from poor working class backgrounds and do not have a share in the spoils that went to the military high command.

In an effort to maintain some control, the generals carried out a coup against al-Bashir on April 11, 2019 and, similar to past military coups, formed a Transitional Military Council (TMC) that was immediately denounced by the protesters yet supported by reactionary regional powers such Saudi Arabia, UAE, and Egypt.

The main actors of the revolution were the youth, who face unemployment and uncertain futures. They developed a hatred of the regime and distrust of politicians. The other key actors were women, particularly those from war affected and displaced communities, whose participation and leadership was unprecedented in Sudan’s history. While SPA/FFC led the revolution, the backbone of the revolution was the independent neighborhood based Resistance and Change Committees (RCC) that, among other things, organized local protests and strikes, linked the locality to the leadership, helped the families of the injured and killed, and, in the absence of governmental institutions, provided necessary services for the local area.

It is precisely this institutional/organizational strength of the protesters, both in the grassroots RCCs and the leadership of SPA/FFC, that enabled them, even under severe repression, to resist the TMC by organizing strikes, and mass sit-ins in public spaces, expressed with the chant “all power to the civilians”. These conditions and tactics created a situation akin to dual power. Despite the key demand for a civilian government, on July 17, 2019 a political power-deal was announced between the FFC and the TMC.

On August 4, 2019, the FFC and TMC signed a charter that set the framework of co-governance by civilians and the military for a period of thirty-nine months. While the constitution is progressive and aims to ‘lay the foundation for a healthy civil government’ it falls short of the demands of the revolution, particularly in that it has no clear mechanism for the reform of the military and the disbanding of the governmental Rapid Support Forces.

The formation of the transitional government has not meant the end of the revolutionary movement. Thousands of RCCs continue to organize, hold the government accountable, and defend their communities against the triple disaster of COVID-19, economic meltdown, and continued violence by militias and state security. Attempts to marginalize and exclude women from transitional structures have been met with fierce resistance. Women’s groups remain at the forefront of struggles and have been continuously fighting for representation and basic safety in order to live without fear. The Left is helping rebuild the labor movement by pressing for legislation to replace the top-down, corporatist-enterprise unions with bottom-up, occupation unions. The revolution is not yet finished, but can it succeed on its own? The authors end by posing a challenge to socialists to form regional alliances and networks that are necessary to fight the common foes of imperialism, militarism, racism, patriarchy, and capitalism.