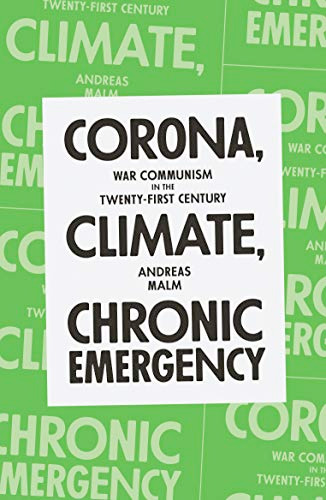 This is an important book that confronts our dire ecological crisis at two levels. It integrates the science of pandemics and global heating with a critical look at the politics demanded by the planetary scope of the problem, the short time-frame for action, and the chronic emergency of increasingly frequent social-ecological disasters.

The destruction of wild nature and intensive animal farming will spur more pandemics. Viruses once safely contained in animal reservoirs–often bats–spillover into human populations (termed zoonotic spillover) due to closer human-animal contact and the dangerous viral mixing grounds of poultry, pig, and other animal farming.

Malm mines the initial states of emergency imposed by governments in 2020 responding to Covid-19 for insights and lessons in contrast with the very different responses to the more serious climate emergency.

While governments and reformist left parties give little to no attention to the root causes of pandemics, Andreas Malm formulates an approach (called “ecological Leninism”) to chronic emergency that does. Malm mines the initial states of emergency imposed by governments in 2020 responding to Covid-19 for insights and lessons in contrast with the very different responses to the more serious climate emergency. There are many takeaways, including how dramatic government-led emergency action can gain majority support.

Global heating is an escalating cascade. Fires, hurricanes, 100-degree temperatures in the Arctic, the melting of ice sheets, pandemics, and the imposed social dislocation, all point to chronic emergency. The time frame for ending the use of fossil fuels, rewilding nature, and carrying out carbon capture and other remedial actions is short. The spatial dimensions of the crisis require coordinated, planetary action.

The politics of emergency

The two predominant currents of the climate justice movement are not fit for the nature of the crisis. The social-democratic politics of the Green New Deal are premised on a gradual and orderly transition. We are facing short time-frames and systemic crisis, and historically, social democracy has failed the test of these moments. After social democracy’s capitulation to world war and failure to counter the rise of Nazism, Malm points to Sweden from the 1950s to the 1970s as the best of cases. But, he notes, “One thing is for sure: such calm days are not returning in the chronic emergency.” Secondly, localism and rejection of state power make anarchism incapable of addressing the time frame and global nature of the crisis, both of which require emergency state action.

The questions of what type of state, what type of action, and how to get there are the crux of Malm’s argument for war communism in the 21st century.

The Russian Revolution is a key historical reference point, both in terms of effective revolutionary response to existential threat, and to the temporal-spatial character of the climate emergency.

Just before the October revolution, Lenin wrote in “The Threatening Catastrophe and How to Fight It,” “A catastrophe of extraordinary dimensions, and a famine, are unavoidably threatening . . . [A] desperate fight against it is necessary, that “heroic efforts” on the part of the people are necessary to avert the calamity, and so forth. Everybody says that. Everybody recognizes that. Everybody has agreed to that. And nothing is being done.”

Lenin continues pointing to the roots of the problem. The needed economic regulation and democratic control to avert wartime famine “are not being undertaken only and solely because their realization would infringe upon the immense profits of a handful of landowners and capitalists.”

The contemporary relevance is stark. Lenin’s call for revolutionary action prevailed in the Bolshevik-led revolution. Bolshevik policies of war communism employed what Malm calls the “hard power” of the state. The workers state appropriated capitalist property, planned production, rationed consumption, withdrew from WWI, and successfully defended the revolution from imperial attack—interestingly without access to fossil fuels, since the White armies cut off access. The Revolution failed to spread internationally, atrophied, and turned into the decidedly anti-ecological, Stalinist dictatorship in its isolation.

In the twenty-first century, Malm argues that in order to avoid planetary catastrophe on the front of global heating and pandemics, several immediate actions are needed. These include closing down meat, soy, and palm oil exports out of tropical regions as part of halting and reversing forest destruction, ending fossil fuel extraction and implementing rationing during a transition period, and nationalizing oil corporations.

The extremely stark and vexing problem In the current emergency is that we must begin without the working-class forces and revolutionary organization needed.

For Malm, key elements of the revolutionary socialism necessary for the moment are “a predisposition for emergency action and an openness to some degree of hard power from the state.” The hard power of war communism also had anti-democratic tendencies, although I think Malm underplays the material factors, especially the international isolation of the Russian Revolution, which led to Stalinism. But this is certainly a dilemma we need to reckon with.

Malm emphasizes three decisive principles of ecological Leninism. The first is “turning the crises of symptoms into cries of the causes. This was the thrust of Lenin’s politics after 1914, turning the outbreak of the war into a blow against the system that generated it. The category of catastrophe was central to the evolution of revolutionary Marxism. The second principle is “speed as paramount virtue.” This means understanding the conjuncture of events and resolving, as Lenin did a month before the Revolution, that “delay is fatal.” And, thirdly, ecological Leninism leaps at opportunities to sharply break with business as usual. Half-measures will not save us. The damaging sectors of the economy must be brought under direct public control.

Fighting without the forces we need

The extremely stark and vexing problem In the current emergency is that we must begin without the working-class forces and revolutionary organization needed. This is a strategic challenge that Malm invites us to take up. He offers his own ideas on this in the forthcoming How to Blow Up a Pipeline, (Verso, 2021). Along with Malm, we also need to sharpen our own thinking and practical work on this now.

We have to deal soberly with ecological scarcity. There isn’t a viable future that involves the enormous material throughput of fossil-fueled capitalism (air travel, planned obsolescence, the lifestyles of the wealthiest 10%, the military, automobiles, and hundreds of other commodities capitalism delivers from global exploitation). As a result of extreme environmental degradation, what will be a desperate attempt to stabilize the planet in an ecological transition will need to emphasize democratic priorities and careful, rationed use of destructive commodities like fossil fuels.

Malm imagines the repurposing of capitalist institutions like border regimes, open to the flow of people, but closed to the flow of ecologically-disruptive commodities. Another proposition is to dedicate the reach and technical capacities of oil corporations to the task of returning captured carbon to the earth, while immediately winding down fossil fuel production. Capitalist exploitation can’t be curbed with carrots, so all these plans need to be developed alongside the social and class forces to implement them. We must face the reality that the current forces of the left are insufficient to adequately address the current crisis.

A proposal like the Green New Deal is an important strategic area and a very positive development in the social democratic current, championed by the Sunrise movement, DSA, and others. The reforms of the Green New Deal, of course, fall far short of the kind of systemic ecological restructuring Malm outlines above, but there is also the question of the extent which the Green New Deal framework itself fits as a political map with the realities of chronic emergency and crisis in the years ahead.

Whichever map is followed, though, the left currently lacks the social force to push forward significant climate reforms. While we have seen a growth of mobilizations around climate justice, and though there was a hopeful revival of disruptive struggle, led by the movement of school strikes, that peaked pre-pandemic in September 2019, electoralism within the Democratic Party dominates the political horizons of much of the left. Even immediate demands are out of reach without a mass upsurge of struggle. Malm’s work in Corona, Climate, Chronic Emergency is a starting point for thinking about how socialists might approach bridging this and related strategic challenges, including the overlapping facts of a vanishingly short time frame for action, the global battlefield, the need for immediate reforms in capitalism, the need for socialist revolution, and the current inadequacy of our class forces for the bigger fights.

There is a lot to discuss and debate in Corona, Climate, Chronic Emergency. It is a helpful revolutionary socialist contribution to understanding the political forms and strategies that are urgent for survival and revolution in a world on fire.

Paul Fleckenstein is a member of the Democratic Socialists of America in Burlington, Vermont and the Tempest Collective. He is a labor and environmental justice activist.